Nymph (Greek)
Nymphs were fey that typically resembled Tel-quessir women, not just physically beautiful, but literally blindingly so. They usually dwelt in forests, streams, waterfalls, or coves. They were the guardians and protectors of these and the portals to the faerie realm. It was said that their beauty could lead anyone who gazed upon them either blindness, madness, or even death. However, they could suppress this ability if they wished. They absolutely hated anything that was either evil or ugly.[citation needed]

Their queen was more powerful than their king. They had the ability to wield the power of nature. They celebrated many different festivals. They tended to live near hollow hills. They were immortal.[citation needed]

They were very similar to wood elves in most cases; for instance, they had markedly pointed ears. Nymphs were always female, possessing incredible beauty that was dangerous to behold. As such, they were the frequent target of satyrs and lecherous human males.[citation needed]

Some considered nymphs to be the most wild and capricious race of fey.[5]

Nymphs in cold climates were often known to hunt upon the backs of wolves.[1]

Compared to Faerûn, nymphs were a more common occurrence on the Evermeet, though still relatively rare. There they inhabited forests, glades, and valleys.[6]

In the Zakhara region's Crowded Sea, nymphs could be found on the island chain of Nada al-Hazan[7] and the archipelago of Jazayir al-Sartan.[8]

Nymphs were sometimes sent as agents of the elven gods Corellon Larethian or Erevan Ilesere.[9]

Among the elves that inhabited Evermeet, nymphs were viewed as being spiritual representatives of the elven gods and they in turn seemed to be positively inclined towards them, rarely harming elves. Some of the island's elves, especially those of the green and silver variety, purposely sought them out.[10] 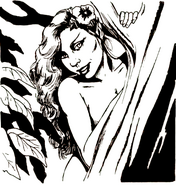 A nymph from 2nd edition.
Add a photo to this gallery

Retrieved from "https://forgottenrealms.fandom.com/wiki/Nymph?oldid=669612"
Community content is available under CC-BY-SA unless otherwise noted.