Greyspace was part of a celestial configuration known as the Triad, which also included Realmspace, where the world of Toril was found, and Krynnspace, home of the world of Krynn. The phlogiston, a rainbow-colored chaotic liquid that surrounded the spheres, had a strong current that flowed from Realmspace directly toward Greyspace, making travel in that direction relatively simple; due to this current, it was impossible to travel directly to Krynnspace from Realmspace. From Greyspace, however, it was a relatively simple matter to travel to either Realmspace or Krynnspace, with strong currents leading to both spheres. From Krynnspace, one could easily move to Realmspace, but travel directly to Greyspace from Krynnspace was impossible.[7]

There was a land here called the Flanaess[8] and a body of water called the Coral Sea.[9]

Similarly to Toril, the inhabitants of Oerth used a number of different calendars to mark the time. The standard most commonly used was the Common Year (CY) calendar.[10] A year on Oerth lasted 365 sidereal days,[11] but as a result of the sun's orbit around the planet, a calendar year contained only 364 solar days.[12][13][14][note 1]

The Year of the Turret, 1360 DR marked the first meeting between Elminster and Mordenkainen on Earth.[15][16] On Oerth, this was shortly before the year 581 CY, when Mordenkainen was beginning to suspect a plot to destroy the Circle of Eight, which culminated in Vecna's first failed attempt at becoming a greater deity.[17][18][note 2]

In the mid‒14th century DR, Jewely Carseah and Marcus of the Waters were sent as emissaries from Oerth to the Rock of Bral to discuss the threat of invasion the Vodoni Empire posed to the crystal spheres of Realmspace, Greyspace, and Krynnspace, in the early stages of the War of the Spheres. The meeting marked the formation of the Free Space Alliance.[19]

In the late 15th century DR, a book on the history of Oerth was part of the collection of the arcanaloth headmaster of the Dweomercore level of Undermountain.[20]

Oerth was home to prominent wizards such as Bigby, Drawmij, Tenser, and Mordenkainen, whose spells were well known on Toril. Mordenkainen was an acquaintance of Elminster's; the two had met on numerous occasions in the home of Ed of the Green Wood on Earth to exchange spells and lore.[21][note 3] Mordenkainen, when he had newly mastered interplanar travel, used to visit Waterdeep with some regularity.[22]

When Harkle Harpell entered into an unorthodox contest of wizardry with the Sea Sprite's wizard Robillard, Harkle and Robillard mentioned a number of Oerthly wizards, including Bigby, Melf, Otiluke, and Tenser. In particular, Robillard regarded Bigby as one of the most powerful and impressive wizards of all time, on any world.[23]

The Oerthly bard Gwydiesin of the Cranes also chatted with Elminster on occasion.[24]

Both Elminster and Khelben "Blackstaff" Arunsun spent time on Oerth, and Elminster suspected that Khelben Arunsun the Younger settled there to begin a life away from the elder Khelben.[25]

Oerth was the homeworld of Scaldulin, a famous hero who wielded a powerful enchanted sword, the Hoarfrost Blade. Before the blade ended up broken and then reforged on Toril, the sword accompanied its owner in the Battle of the Thousand Dead, battle against lich Scaroth the Warped of Blackmoor, and stayed with its master after his transformation into a death knight. The sword also cut down a solar named Arazium.[26]

Large green plover's eggs were a delicacy in the Flanaess.[8] 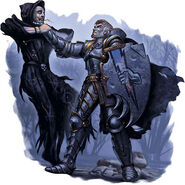 A half-elf gray guard paladin of Heironeous on Oerth.