Ogre (European)
Ogres were a race of giant-kin.

Ogres appeared as giant humanoids with very muscular bodies and large heads. They stood between 9 and 10 feet tall and could weigh 600 to 650 lbs.[3]

Ogres were a lazy, brutish, avaricious race with notoriously quick tempers.[1] Their avaricious nature would often lead them distrust one another and incite squabbling over treasure.[4]

Ogres generally preferred to rely on ambushing their foes and overwhelming them through sheer numbers.[3]

In terms of weapons, ogres were typically seen to use uprooted trees and stone-tipped javelins.[1]

Much like hill giants, ogres were gluttonous creatures willing to eat almost anything. They enjoyed the taste of raw dwarf flesh, but would also eat halfling or elf flesh when they could get it.[9][1] They would often use the skin and bones of their prey to fashion crude loincloths and necklaces.[1]

Ogres were known to typically associate with goblinoids, orcs, and their fellow giant-kin trolls. In the social structure of the giants, the Ordning, ogres were considered the lowest-ranked of all giant-kin. Because of this, they were typically found to be willing servants of giants.[1] The giant races they were most often seen working alongside were hill giants and verbeeg, the former of which they often traded with for trinkets or food.[10]

Many ogres worked as mercenaries, hoping for easy plunder,[3] and in that line of work they were often seen alongside verbeeg.[11] Lone hags, as well as covens, were known to employ ogres as guards, while others polymorphed ogres and sent them out to work as spies.[12]

Ogres spoke Jogishk, a patois of the Giant or Jotun tongue.[3][7]

Half-ogre
Half-ogres were a crossbreed of ogre that was somewhat smarter and weaker than the standard ogre race. They could sometimes pass as unusually large, albeit ugly, humans.
Merrow
Merrows were ogres adapted to the water.
Ice Spire ogre
An ogre subrace found in the Ice Spires region.
Ogrillon
The result of ogre-orc crossbreeding.
Zakharan ogre
Civilized ogres that were common in the southern continent of Zakhara.[13]

According to legend, the ogre race was formed when Othea, wife of the titan Annam All-Father, had an affair with Vaprak.[14]

In 1357 DR, a small army of ogres served the monstrous extraplanar being Imgig Zu. He gathered them in the caverns beneath his tower to witness the Great Awakening of his people from Selûne's Eye, and to provide defense during the deed. The heroes Priam Agrivar, Vajra Valmeyjar, Timoth Eyesbright, and Onyx the Invincible fought through the ogres to confront Imgig and free Cybriana. Though the ogres clubbed them down and caught them, the roof of the cavern miraculously tore open and the brilliant light of the full moon shone through, blinding the ogres long enough for Priam to slay Imgig. As the ritual was undone, the surviving ogres fled.[9]

An ogre from Neverwinter Nights.

Another handsome ogre from Neverwinter Nights. 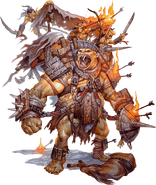 A use of an ogre in warfare.

Another use of an ogre in warfare. 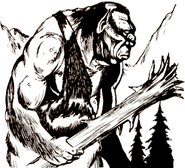 An ogre walks in a pine forest, wielding an uprooted root.

An ogre as a zombie.

Adventures
Dungeon #15, "The Dragon's Gift" • Polyhedron #50, "Counterfeit Dreams" • Dungeon #28, "The Pipes of Doom" • Dungeon #29, "Nymph's Reward" • Doom of Daggerdale • The Tomb of Damara • The Sword of the Dales • The Secret of Spiderhaunt • Dungeon #57, "The Rose of Jumlat" • The Accursed Tower • The Dungeon of Death • City of the Spider Queen • Shadowdale: The Scouring of the Land • Dungeon #206, "Eyes on the Ball" • Hoard of the Dragon Queen • The Rise of Tiamat • Storm King's Thunder
Novels
The Crystal Shard • In Sylvan Shadows • Realms of Valor • The Fallen Fortress • The Ogre's Pact • The Titan of Twilight • The Spine of the World • Baldur's Gate • Sea of Swords • Dissolution • The Thousand Orcs • Condemnation • The Lone Drow • Forsaken House • The Two Swords • Storm of the Dead • Swordmage • Vengeance of the Iron Dwarf
Referenced only
The Ring of Winter • Tymora's Luck
Comics
Advanced Dungeons & Dragons (#3) • Frost Giant's Fury (#1, #2, #3)
Video Games
Pool of Radiance • Curse of the Azure Bonds • Secret of the Silver Blades • Gateway to the Savage Frontier • Pools of Darkness • Spelljammer: Pirates of Realmspace • Treasures of the Savage Frontier • Dungeon Hack • Eye of the Beholder III: Assault on Myth Drannor • Al-Qadim: The Genie's Curse • Descent to Undermountain • Baldur's Gate • Icewind Dale • Baldur's Gate II: Shadows of Amn • Neverwinter Nights • Neverwinter Nights: Hordes of the Underdark • Neverwinter Nights: Wyvern Crown of Cormyr • Neverwinter Nights 2 • Neverwinter Nights 2: Mask of the Betrayer • Neverwinter Nights 2: Mysteries of Westgate • Neverwinter • Sword Coast Legends • Baldur's Gate: Siege of Dragonspear • Idle Champions of the Forgotten Realms • Neverwinter Nights: Darkness over Daggerford • Baldur's Gate III
Card Games
AD&D Trading Cards • Dragonfire ((Moonshae Storms))
Board Games
Dungeons & Dragons Adventure Begins
Organized Play & Licensed Adventures
Lost Temple of the Fey Gods • Blades for Daggerdale • Confrontation at Candlekeep • It's All in the Blood • Assault on Maerimydra • A Fool's Errand • When the Lights Went Out in Candlekeep