Dungeons, Underground, Underdark[1][3]
An ooze was a category of creatures that generally resembled amorphous blobs and mostly dwelt underground. This category of creatures included slimes, jellies and puddings and amorphous creatures.[1]
“
The trick to dealing with oozes is to give them something to focus on. They’re as brainless as they are deadly, so if you poke them with something, they’re likely to fixate on it. Just be sure it’s not something that dissolves too quickly.
”
— Karl, a deep delver[4]

They were essentially blind, but more than made up for that with an ability called blindsight, allowing them to discern nearby objects and creatures without needing to see them. Most oozes secreted an acid from their skin that dissolved flesh and other materials rapidly. They had a unique tendency to resist close-range and melee attacks by dissolving the wielder's weapon slowly.[1][2]

There were many types of oozes, the names often interchangeable with jellies and slimes.

The Demonomicon of Iggwilv was one of the sources that claimed that oozes originated as fragments of the offspring of Juiblex, who was the only known being capable of controlling oozes and of granting them a glimmer of intelligence and tactics.[1]

Sometime in the late 1480s DR numerous oozes of various types were drawn to Blingdenstone under the auspices of the Pudding King.[3] 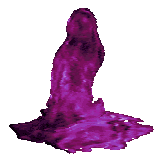