A horned goat's head[12][13]
Orcus was a demon lord and master of the undead.
“
I will be the last creature when I am done. The cosmos will then be perfect, free of the braying abominations that are all other living things.
”
— Orcus[15]

Orcus was typically described as having the head and legs of a goat, although with ram-like horns, a bloated body, bat-like wings, and a long tail.

Orcus cared for nothing save himself—not even his devotees and undead servants—and focused only on spreading misery and evil. One of his most identifiable symbols was the artifact known as the Wand of Orcus, a skull-topped wand with the power to slay any living being. Orcus also wielded a powerful artifact known as the Orcusword.

The Wand of Orcus was a powerful artifact. This skull-topped wand had the ability to automatically slay any living creature it touched. The Wand was highly coveted across the planes, and Orcus sometimes let it fall into the hands of mortals in order to allow them to wreak chaos and evil.

The wand was thought to be in the possession of a cult called the Lurkers In Shadow.

The Orcusword was Orcus's personal weapon when he was still a balor. It was later held in Tchian-Sumere, Orcus's fortress on the Negative Energy Plane.

Orcus' realm was Thanatos, the 113th layer of the Abyss. It was a frigid and frozen layer infested with the undead. Several cities dotted the layer (most of them ruled by minions of Orcus, including a powerful succubus and Quah-Nomag himself). Orcus ruled from his palace of Everlost in the bone-meal desert of Oblivion's End, north of a vast mountain chain called the Final Hills that cut across the layer. Despite Orcus regaining control over Thanatos, Kiaransalee's taint could still be found in the city of Naratyr on the Frozen Sea south of the layer, and in the so-called Forbidden Citadel in the city of Lachrymosa, located in the Final Hills.[note 1]

“
Bloated goat prince of undeath, master of vampires and lord of specters, Orcus, grant me your crushing might and the deadly power of your skull-headed wand!
”
— The Skull King Quah-Nomog[2]

The cult of Orcus was mainly composed of twisted creatures with a morbid fascination with the undead, such as necromancers, as well as creatures deliberately seeking the path to unlife, such as would-be liches and vampires.

In Vaasa and across the Bloodstone Lands, his worship was coordinated by the Cult of the Goat's Head.[16][17]

The following beings were some of Orcus's most infamous servants:

Like many of the most powerful demon lords who struggled for power in the Abyss, Orcus started his existence as a mortal on the Prime Plane. He was apparently a wicked spellcaster of some sort, most probably a priest to some dark deity. After his death, his soul, like the souls of all chaotic evil mortals, went to the Abyss and Orcus began his afterlife as a lowly larva.[18]

Orcus proceeded to climb through the demonic ranks over the next several thousand years, going from larva to mane, from mane to dretch, from dretch to rutterkin, from rutterkin to vrock, from vrock to glabrezu, from glabrezu to nalfeshnee, and eventually a balor. From there, he ascended to the rank of demon lord, becoming the Prince of the Undead and ruling the layer of Thanatos, the Belly of Death. Even though there are other demon lords aspiring to the title of "Prince of the Undead", Orcus' claim to the title went unchallenged for the most part. Ever hungry for more power, Orcus wanted to be recognized as "Prince of Demons", a title held by Demogorgon and coveted also by Graz'zt. As a result, he became the arch-enemy of both demon lords. In time, Orcus also achieved true godhood.

In −1025 DR, a human worshiper of Orcus called Thargaun Crell became the first king of Tharos, which would later become known as Narfell. His dynasty would rule until −633 DR, when the lich-king Belevan was slain by the twin sons of Graz'zt.[19]

In −367 DR, Orcus fathered another son, Heldakar Darakh, on another woman of the Darakh line. This woman was sacrificed to Orcus immediately following Heldakar's birth. This would become a tradition in the Darakh dynasty. Heldakar ascended to the throne of Narfell in −322 DR, following the death of his half-brother Jesthren. Heldakar died in −299 DR.[19]

Orcus became the patron of the Red Wizard Zhengyi in the 900s DR, aiding him in his quest to become a lich. Priests of Orcus supported Zhengyi in 1347 DR, when Zhengyi created the Castle Perilous, giving the lich control over many undead creatures.[20] Zhengyi attacked Damara in 1348 DR, finally bringing it under his control in 1357 DR.[21] Zhengyi lost his power when Gareth Dragonsbane and his company banished Orcus's power from the realm by stealing his wand. Zhengyi's undead army disintegrated along with Castle Perilous and Zhengyi the Witch-King was defeated.[13]

Simultaneously, Orcus was slain by the drow demi-goddess Kiaransalee, who took over rulership of Orcus' layer of the Abyss and locked his (apparently restored) wand away in the last layer of Pandemonium. Kiaransalee decreed that Orcus' name be erased from all existence.

“
That is not dead which can eternal lie, and with strange aeons even death may die.
”
— An unknown author from the Prime Material Plane.[22]

Despite the drow demi-goddess' efforts, Orcus was restored as an undead demon lord, renaming himself Tenebrous. As Tenebrous, Orcus discovered the Last Word, an utterance so powerful that it could destroy deities. The Last Word would also eventually kill those who knew it unless the being was a true deity, and to restore himself to his lost divinity, Orcus went in search for his wand. During his search, Orcus killed several gods, including Primus, god of the modrons, and Maanzecorian.[5] Orcus' efforts were stymied by a group of adventurers and Orcus was again destroyed, this time by the power of the Last Word. A cabal of greater deities, in response to Tenebrous' predations, later nullified the Last Word.

However, Orcus was resurrected by Quah-Nomag, one of his foremost high priests and thralls, in a blasphemous ritual he enacted in the Astral Plane. Orcus then reclaimed his kingdom and his original name, re-proclaiming himself Prince of the Undead, despite his hatred of undead. However, as a result of his second death and resurrection, Orcus again lost his divinity and became the demon prince he once was.

Orcus' divinity thereafter existed as a vestige, named Tenebrous, and could be called upon by binders.

In 1373 DR, the Moonsea region was plunged into chaos as the mysterious Order of the Crippled Fang rose to power under leadership of Archmage Maganus. The wizard harbored a grudge against the Zhentarim and against Fzoul Chembryl, the father the organization who was to blame for the deaths of Maganus' parents. He developed a plan to destroy Zhentil Keep and spent a decade putting the events into motion. This plan resulted in the Archmage's trading his soul in exchange for summoning Orcus to the Prime Material plane. The Order of the Crippled Fang crisis culminated in a full-blown demon attack on Zhentil Keep led by Orcus, his lieutenants Quah-Nomag the Skull-King, vampire lord Kauvra, and lich Harthoon. While a pirate blockade led by a mysteriously returned Avagard, a legendary pirate and enemy of Zhentil Keep (in reality, an agent of the Unseen). The conflict cost many lives of the city's defenders and citizens as well as many structures destroyed or damaged. Eventually, the battle culminated in a battle between Maganus and Fzoul Chembryl, while the Hero of Daggerford, Beirmoura, Lyressa, and Sharalyn Lockleaf stood against the demon lord. When the dust settled, the demon hordes were sent back to the Abyss alongside their master, while Maganus faced Zhentil Keep's justice, a very slow and painful death.[23]

In the late 15th century DR, Orcus found himself summoned to the Underdark, where he used his powers of necromancy to control a dead elder brain named Cyrog.[24] 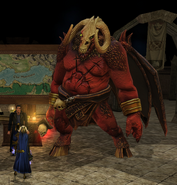 Orcus, after being summoned to the Prime Material plane by Maganus.

Adventures
The Mines of Bloodstone • The Throne of Bloodstone
Video Games
Neverwinter Nights: Tyrants of the Moonsea
Gamebooks
Knight of the Living Dead