Sharns
Masters of Absolute Accord

The Order of Blue Flame, sometimes referred to as the Order of Blue Fire, was an organization whose members often sought out plaguelands in what were referred to as Scar Pilgrimages.[2] The Order also operated many hospices whose mission was to aid those infected by the Spellplague. Because of the Order's good works, they were usually welcomed within cities. However, the Order of Blue Flame's public face and its true motives were very different. The Order's true belief was that the Spellplague was a holy event and members believed plaguelands should be expanded.[3]

The Order's most active chapter was located in Ormpetarr and was led by the elven wizard Vraith until her death. While some members of the Order were interested in studying the effects of the Spellplague, others such as Vraith were actually interested in expanding the area of plaguelands.[1]

The Order sponsored the annual Festival of Blue Fire in Ormpetarr. Thousands of pilgrims journeyed to Ormpetarr during the festival in the hope of receiving a spellscar. Unfortunately, most died a horrible death.[1] 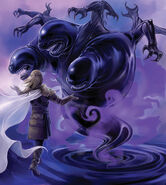 A member of the Order of Blue Flame seeks guidance from a sharn.