Order of the Radiant Heart

A stylized outline of a heart

The Order of the Radiant Heart was a fraternal organization, comprised of benevolent paladins and clerics that operated throughout Faerûn. The brave champions of this order devoted themselves to combating forces of evil, correcting injustice and maintaining peace and order in the Realms. While these devout men and women primarily venerated Torm, Tyr and Helm they held the faiths of many compassionate deities among their ranks.[1]

The order was notable in that they honored not only distinguished service, but glorified those who had lived a long life in service of their god and the people of Faerûn.[1]

“
"The courage of one can change the destiny of many."
”
— motto of the Order of the Radiant Heart

Each branch of the Order of the Radiant Heart was led by a three-member council of senior officers known as Prelates, each of whom had at least 10 years of service, and were assisted by another senior knight known as a Chancellor. When suggestions or issues were brought forth by the chancellor the prelates would consider their words and reach a consensus that would be best for their comrades.[1]

When a prelate retired or passed away, they were replaced by the current chancellor, and a new knight was appointed to that post. All of the knight-officers were identified by a tattoo of the order's symbol on their left wrist.[1]

Prospective members of the Radiant Heart were required to have two sponsors prior to their acceptance: one person of royal descent from the applicant's home nation and a knight in active service. Upon their approval, novices would be admitted into the Radiant Heart Auxiliary, the division of the order comprised of its junior knights.[1]

In order to become a full-fledged knight, distinguished as the Most Noble Order of the Radiant Heart, a knight must have lived to forty years of age and shown exceptional dedication to his brothers in arms. The members of this senior order were seen as dignified paragons of honor, and they commanded respect from even the highest nobility from across the Realms. There were only 25 knights of the Most Holy Order at any given time, and new candidates were only considered when a knight stepped down or died in service.[1]

Any member who violated their vows to the Order or commit any deed that was heinous enough to lose their paladinhood was punished with death by beheading.[1]

The order had a stronghold within the City of Coins in Amn, known as the High Hall of the Radiant Heart in the city's Temple District. Prelate Wessalen was among the paladin on their council and Sir Keldorn Firecam one of their knights of the Most Holy Order.[2]

In 1368 DR, Ajantis Ilvastarr was directed to investigate the bandit raids and iron crisis plaguing the town of Nashkel and the regions further north in the Sword Coast. This mission was a test for his admission into the Radiant Heart Auxiliary.[3] 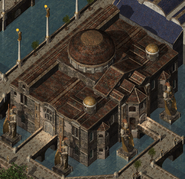 High Hall interior
Add a photo to this gallery

Retrieved from "https://forgottenrealms.fandom.com/wiki/Order_of_the_Radiant_Heart?oldid=590623"
Community content is available under CC-BY-SA unless otherwise noted.