Four arms, long grub-like body[2]
Ormyrr were rarely seen and highly intelligent amphibious creatures from another world. They were fascinated with magic and were fierce enemies of yuan-ti and harpies.[2]

Ormyrr resembled a giant worm with a powerful torso, two sets of short muscular arms with sharp talons, and a huge head that looked somewhat like that of a frog. Their large maws were fanged. Ormyrr's flesh was of pale white, almost mushroom-like color, with a purple underside. Their eyes were crowned with thick bony ridges[1]. Males and females appeared completely identical to any non-ormyrr, and the creatures themselves were able to distinguish sexes by scent, according to sages.[2]

Some ormyrr enjoyed decorating themselves with necklaces made out of slain creatures' and adventurers' skulls. These items served decorative and practical purposes, the skulls often hid small items, and thrown weapons inside.[2]

Ormyrr seemed to be immune to a big number of poisons, venoms, and toxins.[2]

Ormyrr were wildly fascinated by magic even though they possessed no aptitude for the art. It did not stop them from trying to develop the magic of their own. They dreamt of being able to fly and wanted no other arcane ability more, be it via a spell, or wondrous item, growing wings, or breeding wings into their race. They have attempted mating with creatures like wyverns.[2] Ormyrr hoarded magic items and they attempted to take hold of wondrous items, scrolls, books, at every chance they got. Their obsession led them to lie, rob, and assault in search of magic.[1]

Ormyrr hated yuan-ti and harpies and always attacked them on sight.[2]

Ormyrr eagerly utilized their powerful appendages in combat, often holding a weapon, even if it were a two-handed type, in each of their four hands hand when possible. Their obsession with arcane almost always led them to wield magic weapons.[2]

Ormyrr used their intelligence and aquatic nature to lay ambushes along river banks.[1] When going into combat they started with bombarding their opponents with rocks and other missiles. Their high strength let them hurl boulders up to 40 feet (12 meters). Once the opponents reached ormyrr, the creatures wielded four powerful weapons into combat, usually pairs of two-handed axes or swords. Their bite was as deadly as their swords. When ormyrr landed a successful hit with any of their attacks, they attempted to roll over their opponents, constricting them with the long worm-like bodies.[2]

Ormyrr favored weapons such as slings, weighted nets, tridents, from afar, before tossing them aside and switching to four axes or blades.[2]

Spellcasters were the prime attack target for ormyrr in combat, they always tried to take out opponents with obvious magical abilities.[2]

Ormyrr were amphibious semi-nomadic[1] creatures and liked to settle close to the water and hibernate at the bottom of lakes in the mud, or go out into sea[3] during cold winter months. Their preferred hunting happened on land though. They could be found hunting up to 40 miles away from their homes.[2]

Ormyrr lived in tribes keeping to themselves and rarely interacting with other intelligent species or waged war. Humans on the North were aware of three ormyrr tribes Iyryrildu[2], Uluauther[2], and Sharpstick clan[4].

Ormyrr had their own gods (usually carved statues of giant ormyrr with wings hilding boulders above their hands) but have been known to worship human deities of magic, like Mystra.[3]

In 1369 DR, ormyrr Sharpstick clan made a home under the ruins of Myth Drannor, during its occupation of the Cult of the Dragon, their scarred cultists, and the undead created by the Pool of Radiance.[4] 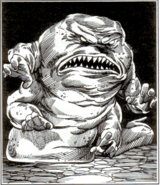 Ormyrr found under the ruins of Myth Drannor.

Two old ormyrr corpses found in the ruins of Myth Drannor.
Add a photo to this gallery

Retrieved from "https://forgottenrealms.fandom.com/wiki/Ormyrr?oldid=589320"
Community content is available under CC-BY-SA unless otherwise noted.