Underground
Otyughs (pronounced: /ˈɑːtjʌgz/ AT-yugz[6][7]) were a type of gulguthra,[8][9] strange aberrations that dwelt underground and delighted in the eating of filth and offal.[3]

Otyughs were strange-looking creatures, with bloated, oval-shaped bodies around 8 feet (2.4 meters) wide that stood on three shuffling elephantine legs and had a disgusting, rock-like hide. They had a pair of long tentacles that were bedecked in rough thorny growths and ended in leaf-shaped pads bearing rows of more sharp spikes. A third tentacle sprouted from the top of the otyugh's body, forming a vine-like stalk standing some 2 feet (61 centimeters) high, and ended in a pair of eyes and an olfactory organ. The body of the creature contained a massive fang-filled mouth, shaped like a crude gash through its center. A typical otyugh was around 500 pounds (230 kilograms) in mass.[3]

Despite its appearance and habits, an otyugh was somewhat intelligent and capable of speech in the Common tongue.[3]

Due to the nature of the otyughs' appetites, their mouths were filthy and often carried diseases like filth fever, inflicted with a bite.[3]

Otyughs were generally content to stay hidden in their lairs, usually only attacking living creatures if they felt threatened or hungry. They would slash prey with their thorny tentacles, or use them to grab and squeeze creatures and drag them into their maws.[3]

In the Arena of Blood in Manshaka, hungry otyughs were kept to devour the carcasses of the slain, but they would seize an unlucky contestant given the chance. In the Year of the Prince, 1357 DR, Vajra Valmeyjar drove a troll into its tentacles.[10]

In 1357 DR, otyughs could occasionally be found in the sewers of Waterdeep.[11]

Dwelling primarily underground, otyughs could be found skulking among piles of refuse and waste. They made such places their lairs, or else gathered refuse to fill their lairs. An otyugh spent the majority of time in its lair, burying itself in trash with only the sensory stalk protruding above the heap. It sat for hours on end, shoveling "food" into its maw with its tentacles.[3]

Otyughs were primarily omnivorous scavengers. They could consume almost all kinds of refuse and waste, such as carrion, offal, and many other things others would view as garbage. Nevertheless, they would take fresh meat when they had the chance.[3]

In the nation of Thay, otyughs could be found in the Surmarsh.[12][13]

Because of their habits, otyughs were often viewed as a convenient means of garbage disposal by many intelligent creatures dwelling underground. They would dump their garbage and waste in otyugh lairs, which would, most of the time, not attack them.[3]

They were also employed as guardian creatures in sewers and other foul areas.[14] For example, an amphibious otyugh was kept as a guardian for the sewer and river channel beneath the Temple of Mystra in Wheloon in the Year of Lightning Storms, 1374 DR. Instead of waste, it was fed regularly with fresh seafood: live shrimp, lobsters, and crabs.[14]

Promotional wallpaper of an otyugh.

Detail of the otyugh's tentacles. 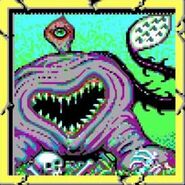 Otyugh found in the sewers of Tilverton.