Bear-like body
Avian head
Hooked beak
An owlbear was a large monstrosity that looked like a cross between an owl and a bear.[3]
“
Once the wolves and owlbears catch your scent, they'll follow you. If you can't keep ahead of them, they'll eat you. Slowly, if it's an owlbear that catches you. They like cruel sport with their food.
”
— Florin Falconhand[7]

Owlbears were monstrous beasts with the bodies of bears covered in thick fur and feathers. Their heads were like those of owls, but with a serrated beak.[1]

Owlbears hunted from around sunset to sunrise. They hooted or screeched to declare their territory and to flush prey into their hunting grounds. Owlbears also screeched as a way to attract a mate. When an owlbear successfully caught its prey, it tended to partially consume part of it on the spot, before dragging the rest back to its lair to be stored. The scent of flesh that emanated from an owlbear's lair often attracted creatures and therefore, more prey.[1]

These creatures were incredibly aggressive, going so far as to slay any living creature they saw. This territorial attitude caused many folks who lived with nature to purposefully hunt owlbears before they had a chance to destroy the local wildlife.[citation needed]

The owlbears of the Starwood area of the Cormanthor forest quickly ate through their food supply of wolves, rabbits, and serpents. Their population began to decrease as food became scarce, although they came across a supply of harvester termites and found that they were edible. They quickly found that they could maintain their own termite colonies by managing their wood supplies, and therefore effectively grew their own food.[8]

As a side effect of this practice, horses were drawn to the scent of the termite shells mixed with owlbear saliva, and the owlbears took to hiding and waiting for horses to arrive, before pushing them into a termite pit and then devouring them. Pyrolisks were also drawn to the scent, but owlbears would abandon a pit if a pyrolisk turned up, rather than risk being incinerated.[9]

Owlbear leather was a quality crafting material, used in creation of armor and reinforcing weapons.[10]

How the owlbear came to be was a long-running argument among scholars. The mostly widely held theory was of course that the first owlbear was the product of a demented mage crossing a bear and a giant owl.[3][1] However, the oldest elves recalled that owlbears had been around for many millennia and a few fey claimed owlbears had always been found in the Feywild.[1] In fact, owlbears were brought into being by one of the creator races,[11] most likely the aearee.[speculation][note 1]

During the Silver Age of Netheril, Netherese human colonists led by the Terraseer eradicated the 3,000-strong population of owlbears of the Savage Frontier so they could not trouble their caravans, in the so-called Caravan War in 1491 NY (−2368 DR). They established the Old Owl Well outpost there and named it for the owlbears.[11]

An Owlbear to the left (Neverwinter MMO Promo shot).

Owlbear used as a mount in the Neverwinter MMO. 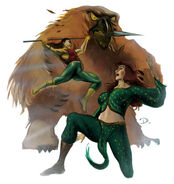 A strongheart halfling fends off an attack by an owlbear.

Jeff Easley's early art of a troll, an owlbear, and a shambling mound. 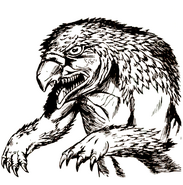 An owlbear from 2nd edition.

This, too, is an owlbear.

Attacking owlbear and its flameskull buddy.

A depiction of an owlbear from Adventures in the Forgotten Realms