Anauroch
Phaerimms, also known as magicgrubs[6] and thornbacks[7] were malevolent and highly intelligent aberrations who were natural spell-casters.[1]
“
Phaerimm? Extremely powerful magic-using creatures, nearly all teeth, claws, and tail... They just up and disappeared one day. It must have taken something awfully strong to drive them away.
”
— Jarial the Sorcerer[8]

Phaerimms were conical in shape with ovoid heads. They had barbed teeth and a venomous hollow barb on the end of their tails. Phaerimms had four arms. Their spiked, slug-shaped bodies were a greenish color covered by rough, scaly, and leathery hides.[9]

Wholly evil and sadistic, phaerimms were ambitious and malicious creatures that worked only for their own individual causes. They delighted in bringing pain to others and would gladly erase all other beings from existence, save for the fact that they would lack slaves to torture for sport if they did so.[10] Their thought processes and values were wholly alien to most other races, however their inclination toward cruelty had the effect of making them somewhat predictable.[1]

In addition to their spell-casting abilities, phaerimms were formidable opponents in melee combat. Their tail was strong enough to knock over most humanoids. The stinger at the end of the tail injected a powerful venom into a target, causing paralysis.[4] They used their four arms to great effect in combat. Each arm was able to wield a weapon independently. A common tactic used by phaerimms in combat was to simply grab an opponent to drag to their tooth-covered maws, delivering a usually fatal bite.[11]

Despite these many strengths, most phaerimms felt that physical combat was only a last resort, and to engage in it was to admit that their magic was too weak to deal with a threat.[1]

Phaerimms were incredibly powerful spell-casters. Not only were they capable of casting far more spells than most human mages, they had developed their own unique spells, which could only be cast by phaerimms.[4] They specialized in mind-controlling spells, which were so strong that they could control nearly any creature, including powerful ones such as beholders and mind flayers. A negative side-effect of phaerimm magic was that it drained moisture from the surrounding area. Extensive use of this magic led to the creation of the infamous Anauroch desert.[10]

All spells cast by a phaerimm were done through will alone; they did not require spell components or incantations. Their magical studies mainly composed of altering spells cast by humanoids to be cast in such a way.[4]

Phaerimms had a degree of natural resistance to nearly all effects and spells. Additionally, they also had the natural ability to absorb or deflect any spell cast on them.[4] Phaerimm also had the ability to detect any magic.[1]

Phaerimms were solitary creatures but always lived near other phaerimms, both for protection and to gain pleasure from unleashing devious schemes on one another. A phaerimm always retained a retinue of enslaved creatures.[4] On the rare occasions when a group of phaerimms were threatened, they would form a WarGather at a strategically important location.[12]

Phaerimms communicated with one another non-verbally by varying the wind speeds around their bodies.[1] The phaerimm language was so complex it was usually incomprehensible to other creatures.[11] It sounded like the whispering of strange winds.[13] With non-phaerimms, they communicated telepathically. They understood Common and knew several other languages.[1]

They did not maintain direct relations with non-phaerimm organizations or realms, instead relying on magically-enslaved agents to do their bidding beyond their territory.[4]

Phaerimms had a particular hatred for tomb tappers, because of their immunity to phaerimm mind control.[4]

Phaerimms made their homes in fortified underground caves. Since this was where a phaerimm stored its magical items and spellbooks, they were defended by powerful magical traps, slaves, and spellfields.[5] Most phaerimm lived in the Buried Realms beneath Anauroch,[14] but small groups lived elsewehere, such as in the ruins of Myth Drannor[15] or the beholder city of Ooltul.[1]

Phaerimms would always choose to fly unless prevented from doing so.[9] Phaerimms were carnivores, capturing mammals and reptiles, sentient or not, and holding them as slaves until slaughtered for consumption.[4] Phaerimms had to live in an area that had magic. This was a result of their unique digestive tract. Their stomach acid and intestines relied on the presence of magic to digest and absorb nutrients properly.[11]

Despite their windbag-like bodies, the bodies of phaerimms did include skeletons.[16]

A phaerimm reproduced by injecting an egg into a victim with the stinger on its tail. The egg hatched within the paralyzed victim, and the larva began consuming the host alive from the inside. The larva could be killed safely only with the casting of a cure disease spell.[4]

Phaerimms were capable of seeing any astral, incorporeal, or invisible creature within 120 feet (37 meters).[1] They were also able to see with darkvision to a distance of up to 160 feet (49 meters) away.[4]

At one point during the Founding Time, it was rumored that the Mhaurlok Expanse, an area of the Northdark where chaotic energy and primal forces ran wild, was created as a result of an ancient battle between Delzoun and the phaerimms.[18]

In −461 DR, in retaliation and for their own survival, the phaerimms developed a powerful spell that drained the life from Netherese lands and their floating cities. Unbeknownst to the Netherese, their enormous usage of magic was destroying the underground home of the entire phaerimm race, which depended on the inherent magic of nature to survive. This created barren wastelands where there once were lush fields and areas of wild magic. The chaotic effects of magics caused the arcanists of High Netheril to flee the empire for safer lands.[19][20][21]

Within the next half century, in −427 DR, the phaerimms used spells to bring down the floating cities of Lhaoda and Tith Tilendrothael, resulting in the other Netherese enclaves setting wards against this type of attack.[19][20][21]

Circa −450 DR, large-scale Netherese migration into the Savage Frontier began, when the effects of the phaerimms' lifedrain dweomers became apparent. Many of the arcanists of Low Netheril fled for the recently-established magocracy of Illusk. The absence of the arcanists caused civil unrest in Low Netheril, and the commoners fled their homes. As the empire found it more difficult to feed its people, the stress led to a series of wars; some were fought to keep the restless populace entertained, while others were fought to claim more arable land.[19][20]

In −354 DR, the arcanist Melathlar fled Netheril to Illusk. He sacrificed his life to power the spell that raised a great stone tower, walls, and powerful spellwards around the Netherese settlement to protect it from the phaerimms. Later that year, the first recorded clash between the phaerimms and sharns occurred.[22]

A few years later in −350 DR, three powerful phaerimm sorcerers known as the Triumvirate took over the beholder city of Ooltul.[22]

In −100 DR, Delzoun, the Northkingdom, met its end before the advancing phaerimms and other threats. Its citadels on the surface survived and stayed under dwarven control.[23]

The sharns finally defeated the phaerimms in the Year of the Closed Scroll, 329 DR, thus halting the spread of Anauroch.[24][25] They imprisoned them behind the Sharn Wall beneath Anauroch, in the Buried Realms, which the phaerimms called the Phaerlin.[26]

In 1346 DR, a portal to Avernus was erected in the Burial Glen of Myth Drannor by Banites loyal to the High Imperceptor of Mulmaster but under the influence of Zhentarim agents and, by proxy, a cabal of alhoon living in the ruins. The alhoon had it erected so that the devils it spawned would prevent the local phaerimms from attacking the liches while they searched the city for magic.[27][28]

The phaerimm that dwelt within the ruined Myth Drannor and its Dwarven Dungeons, along with their red dragon dracolich ally, Pelendralaar, were driven out by the agents of the Cult of the Dragon in the Year of the Gauntlet, 1369 DR.[8]

Some two years later, Nightal 20, the Year of the Unstrung Harp, 1371 DR, the Sharn Wall was breached near the city of Evereska, unleashing the phaerimms to cause chaos in the lands outside. A united force of elves, allies from Waterdeep and the shades from returned Thultanthar kept the phaerimm at bay.[14]

The return of the Netherese to Faerûn the following year saw them quickly target the colony of phaerimms living in the ruins for destruction. They erected a shadowshell that prevented the phaerimms' escape, before they were to descend and wipe out their ancient foes. An attack on Thultanthar by the Chosen of Mystra, however, prevented them both from confirming that all of the phaerimms living there had been killed and from looting what magic remained.[29]

During the 1470s DR, the shadovar ruthlessly hunted down any phaerimms they could find. Their desire for revenge drove them to hunt the phaerimms to extinction, although at least one corpse of a phaerimm remained intact within the Phaerimm Memory Spire in Netheril.[30]

A phaerimm on the cover of Netheril: Empire of Magic.

A phaerimm casting a fire spell. 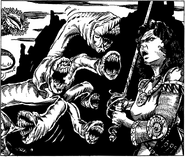 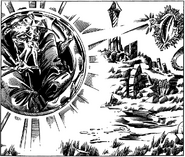 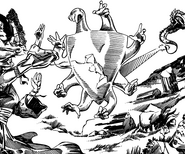