Phandalin was a mainly human village located northeast of Leilon, where the road that ran from the High Road to Triboar faded into a trail.[2] It was raided by orcs in 951 DR and subsequently abandoned.[2][3] It was eventually resettled, however, and Phandalin became a frontier settlement of farmers and prospectors looking for wealth in the Sword Mountains in the late 15th century DR.[4]

Phandalin was originally a farming community. However, when the orcs of the realm of Uruth Ukrypt had destroyed all game in their realm, they went in search of food and turned on the human settlements in the area, raiding them. Phandalin was one of these settlements, and in 951 DR, it was overrun and then abandoned.[2][3]

After Volothamp Geddarm passed through the town and wrote about it, the area experienced an influx of tourists and adventurers.[5]

Sometime in the 1400s DR, settlers from Neverwinter and Waterdeep resettled the ruins of Phandalin, and it was well-established by 1491 DR.[note 1][4]

Phandalin had no functioning government, but the townsfolk annually elected a "townsmaster". The townsmaster would serve as a judge and mediator, and also kept the records that needed to be kept.[6] 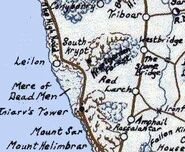 2e map of the vicinity.
Add a photo to this gallery

Retrieved from "https://forgottenrealms.fandom.com/wiki/Phandalin?oldid=484900"
Community content is available under CC-BY-SA unless otherwise noted.