Edit
This article is about the material found between the crystal spheres. For the dragon, see Phlogiston (dragon).

listen) was a term that could either refer to the space between the crystal spheres of the Prime Material Plane or to the flammable fluid that permeated it, a rainbow-colored chaotic material that surrounded the spheres. Bizarre creatures inhabited it and preyed on spelljammers traveling between spheres.[1][4] Spacefarers sometimes called the phlogiston the flow or the Rainbow Ocean.[2]

The phlogiston was far from homogeneous. The fluid itself varied in its density from place to place and also displayed river-like flows, sometimes connecting objects such as the crystal spheres themselves within them. Spelljammers could make use of this flow to greatly increase their speeds through the vast distances within the phlogiston. Increasing the contact area with the flow to acquire greater speed was also the reason some spelljamming ships had sails.[1]

The crystal spheres floated freely in the phlogiston, sometimes enough to significantly change their positions with respect to each other over time. The flow, however, remained unaltered, so navigation between the spheres remained possible. Many of these rivers flowed in both directions, but some flowed in only one way, forcing a return trip to take a different route.[1]

Stable Configurations in the Flow[]

Most crystal spheres randomly floated in the phlogiston. However, in rare cases, stable configurations existed that ensured reliable routes between spheres. By the mid‒14th century DR, only three such configurations were commonly known to spacefarers,[5] but there were at least several others.[6]

Another stable configuration was located very close to Realmspace and was known as the Arcane Inner Flow. It encompassed nearly a dozen crystal spheres, including Refuge, a close neighbor of Realmspace and the site of a spaceport controlled by the Arcane,[8] as well as Pirtelspace and the elven-controlled sphere of Darnannon. Sometimes, crystal spheres wandering in the phlogiston became temporary or permanent members of the Inner Flow.[5]

The third known stable configuration of the flow was known as the Arcane Outer Flow and was believed to include over 100 crystal spheres. Safe routes between the Inner and the Outer Flow were known only to the Arcane.[5]

Some areas of the phlogiston contained vast clouds of negative energy known as Dark Regions. One particularly dangerous Dark Region was located between the Vodoni Empire and the Realmspace triangle and was known as the Weird. It was inhabited by the Zalani ghost ship Lady Lenore.[9]

The phlogiston was an opaque, brilliant, multicolored ether that did not resemble any of the four elements. It could not exist inside crystal spheres and quickly dissipated if brought inside, although it did permeate into a spelljammer's air envelope while it sailed through the phlogiston. It also could not be reproduced. Most importantly, it was an extremely flammable substance. Any spark or flame, magical or otherwise, immediately exploded, violently igniting the ship and its surrounding area. Because of this, travelers always extinguished their flames before leaving their crystal spheres. Enclosed areas of ships could only be illuminated by magical or flameless lights, such as those produced by fireflies.[1]

Because of the obscuring nature of the phlogiston, crystal spheres were usually not visible during most of the duration of a trip. They only became visible at very close distances and, due to their enormous sizes, always appeared like perfectly flat walls with no apparent curvature.[10]

The phlogiston also completely blocked access to other planes. It was impossible to access another plane while in the flow, even the extradimensional space created by a Mordenkainen's magnificent mansion spell or a magical item such as a portable hole. Except through the use of powerful magic such as a limited wish spell or similar, those regions remained inaccessible until the user returned to wildspace, which supported extraplanar travel normally.[11] It was also unclear whether the phlogiston touched the border of the Ethereal plane.[12]

Teldin Moore and the kender Gaye battle scro boarders on the deck of the gnomish spelljammer Perilous Halibut while traveling through the "flow". 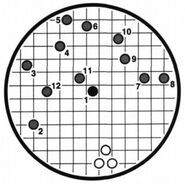 Relative position of the Vodoni Empire and the three spheres of the Free Space Alliance in the phlogiston.