Required
A piwafwi was a drow cloak that granted increased powers of stealth and hiding. It came in two varieties, lesser and greater.[1]

A piwafwi was a dark-hued cloak.[1]

A lesser piwafwi was identical in ability to a cloak of elvenkind.[1][3] When the hood was drawn over the head, it increased the wearer's ability to hide.[2]

When the hood was drawn over the head, the wearer became almost invisible to normal sight, akin to an invisibility spell, and infravision, thanks to the heat-shielding properties of the cloak.[citation needed]

The creator of a piwafwi had to be a drow and had to know the spells endure elements and invisibility.[1]

The drow used these cloaks to stay out of sight in the Underdark. They were fashioned from spider silk and other unknown fibers and it was common for the wearer's house symbol to be included on the cloak.

Many piwafwi, especially those of drow nobles or wizards, were known to have other magical enchantments on them that made them strong enough to be resistant to magical and melee attacks.[4][5][6]

As with drow possessions in general, it was very rare for other races to have piwafwis due to the xenophobic and protective nature of drow society.[citation needed]

Like many other drow items, direct sunlight would destroy a piwafwi, rendering it useless after two weeks of exposure. Even moonlight would fade it some. This was changed when Liriel Baenre inscribed a rune on the tree Yggdrasil's Child, allowing drow objects and magic to survive on the surface.[7]

By the late 1490s DR, a piwafwi would lose its magic after merely one hour of continuous exposure to sunlight.[3] 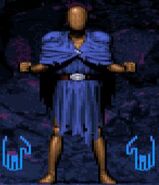 Retrieved from "https://forgottenrealms.fandom.com/wiki/Piwafwi?oldid=674454"
Community content is available under CC-BY-SA unless otherwise noted.