0.5 lb (230 g)
Potions of healing were magic potions that healed the wounds of creatures who drank them.[9][10]
“
Healing quaff. You never forget the taste. A priest of Tempus fed me one, once; cost me all the coins I had. My thanks!
”
— Agannor Wildsilver[1]

Regardless of its potency, a potion of healing was a red liquid that shimmered when agitated within its vial.[9][10] Many healing potions were marked with a universal sign – a circle, or more complex circle surrounded by radiating rays. The symbol was used by healers and potion makers to indicate the remedial properties of the potions. The symbols were usually placed on vials directly or on the wax seals over the stoppers.[13]

The potions typically had a pleasant scent of honey and orange blossoms.[14]

Upon drinking a potion of healing, some of a creature's wounds healed within seconds.[9] There were several different types of potions of healing, which varied mostly by the intensity of their curative power.[10] A potion of healing's curative magic was an effective remedy for muscles, atrophied from being unused.[15]

Any variety of potion of healing could be brewed by anyone skilled with the use of a herbalism kit,[9] even if the brewer did not have any magical ability, provided the raw materials were available. Brewing times varied, as well as cost: the simplest potions of healing took merely a day to brew, while the potent potion of supreme healing took almost a month and was substantially more expensive to produce.[16]

In mid-14th century DR, a halfling curio merchant in the Yawning Portal, Nalbas, was selling his strange versions of potions of healing claiming them to be as potent as any other version of the potion with the only difference being a bitter taste.[17]

In the late 15th century DR, potions of healing and potions of greater healing produced by the wood elf druid Fala Lefaliir were available for purchase at Corellon's Crown, a store located in Trollskull Alley in the North Ward of Waterdeep.[11]

Fey healing
The elves of New Sharandar formulated a variety of these potions called potions of fey healing.[18]
Healing quaff
A clear odorless and colorless potion from Cormyr that sparkled and tasted of tingling, like swallowing a cool breeze.[1]
Paste of healing
The people of Serôs had a thick, gelatinous paste version of this potion,[19] suitable for use in their underwater environment. Like other pastes of Serôs, a paste of healing consisted of kelp and other viscous substances. It was stored in either clamshells or flexible tubes made from eelskin.[20]

One of the suggested ingredients for crafting a potion of healing or a potion of extra healing was honey from giant bees.[3]

Blueglow moss could be distilled into a potent potion of healing, distinct for its blue color. Although, just like the moss itself, it likely lost its restorative qualities when taken outside of the mythal's borders.[15] 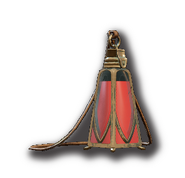 A vial with a potion of healing from the Western Heartlands.