Teeth
Replacing lost teeth, false teeth were made of materials such as wood,[5] gold, silver, or porcelain.[6] Of the four, wood teeth were the most at risk of being broken.[5]
Hook
A primitive type of hand prosthetic that was quite popular among seafarers.[3] It consisted of a cup and an attached gaff.[7] In the 14th century DR, Aurora's Whole Realms Catalogue offered brass, gold, silver, and steel hooks in both human and demihuman sizes.[3]
Peg
A primitive type of leg prosthetic,[4] pegs were quite popular among seafarers. In the 14th century DR, Aurora's Whole Realms Catalogue offered brass, gold, ivory, silver, and wood pegs in both human and demihuman sizes.[3]
Wooden leg
A more developed type of leg prosthetic, but similarly associated with sailors.[8]
Clockwork prosthetics
An expensive sort of prosthetic limb or hand that was produced by the gnomes of Skullport's Clockwork Wonders store. The limbs took a full month to design and one to three months to construct. Downsides included needing to regularly oil them to prevent their gears and mechanisms from jamming or corroding. They also also needed to be wound up several times a day. On the plus side, with an additional fee they could be outfitted with additional features like greater durability or hidden spring-loaded weapons.[2]
Drow craftwork
The drow of the Underdark developed advanced mechanical prosthetics with many ball-swivel joints and intricate parts operated via cables similar to tendons. These were precisely crafted and had hands as dexterous and arms as agile as the originals. Moreover, they were made from adamantine, giving them both flexibility and hardness, so they wouldn't snap or shatter when stressed—in fact, these could punch or claw through typical armors and the skin beneath. A delicate hand could be detached and replaced with a combat-ready claw or an attached axe, sword, spiked mace, or other weapon when preparing for battle. Moreover, even whole-bodied drow would wear similar apparatuses over their limbs, giving them for example one-piece sword-gauntlets or toe-claws or spikes that aided in climbing and kicking in battle. Such devices were among the most common and most advanced of drow engineering, but the drow weren't in the habit of sharing designs among each other or with outsiders.[9] A seller of artificial limbs in Menzoberranzan was Sh'aun Darnruel.[10]
Magical

Realistic
A wide variety of magical prosthetics that prevented others from noticing the body part was artificial and that their wearer did not have full use of it.[11][12][note 1]
Wondrous
A common variety of wondrous item, these functioned identically to the limbs that they replaced and could not be removed against the wearer's will.[1]

Plangent
In the land of Durpar, a unique type of violet crystal known as plangent was discovered in the late 15th century DR and used to create prosthetic limbs that were magically animate.[13]

Ebony hands
One knowledgeable wizard was able to create for Kaverin Ebonhand prosthetic hands out of an enchanted ebony-black rock. Once pressed against a fresh stump, the magic molded the black stone into the form of hands. The magic hands acted as if they were flesh and blood but were made out of stone.[14]
Ersatz eye
A type of magical eye prosthetic.[15]
Pegleg of Immurk the Invincible
A magical peg leg that was rumored to have been passed around by adventurers after its owner was lost at sea. When grafted onto a body it would shorten or lengthen to whatever length was appropriate for walking. It allowed its wearer to summon a parrot familiar. It could detect gold pieces within a 100‑foot (30‑meter) radius. It made the wearer incapable of becoming seasick and proficient in navigating, the use of harpoons and ropes, swimming, sensing the weather, and general seamanship. And finally, three times per day the peg leg could be tapped against something to unleash a knock spell. Overall it was worth around 10,000 gold pieces.[16]

In the late 15th century DR, a barber in Silverymoon by the name of Jooge Nopsmoth would use his expertise in dentistry to replace troublesome teeth with prosthetics made of gold, silver, or porcelain. He also offered special iron teeth, which allowed his annis hag master to eavesdrop on their wearer.[6]

“
...werk compensatorily by grantin' in flair what they takes in facil'ty.
”
— One pirate describing their hook or peg leg.[3] 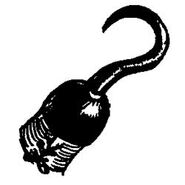 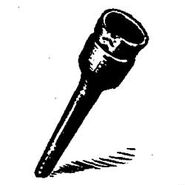 A male Calishite shows off his golden tooth.