Edit
This article is about the creature. For the spell, see Pseudodragon (spell).

Brownish red
A pseudodragon was a small dragon-kin known to be playful but shy. Pseudodragons were not true dragons, but were highly valued for their use as wizard's familiars.[citation needed] They were also sometimes dispatched in times of need by an array of deities including Brandobaris, Erevan Ilesere, Gond, Gwaeron Windstrom, Marthammor Duin, Mystra, and Rillifane Rallathil.[7]

Pseudodragons typically had bodies about one foot long, with a two-foot tail and weighed about seven pounds. They could communicate telepathically in common or draconic and also through the vocalization of animal noises. While pseudodragons could bite, their main weapon was a stinging, poisonous tail, and they had chameleon-like abilities, though their color was usually a brownish red.[citation needed]

Their general attitude was similar to that of a small cat but with a cunning intelligence. Pseudodragons loved to hunt vermin and small animals for food. They were wary of evil beings, but were willing to serve as a companion to another being if treated well and respected.[citation needed]

Pseudodragons inhabited temperate forests in the wild, but they could often be found as familiars in nearly any environment.[citation needed]

A pseudodragon serving as a familiar.

A Pseudodragon to the right (Neverwinter MMO Promo shot).

Pseudodragon pet in the Neverwinter MMO

A pseudodragon with a bird friend. 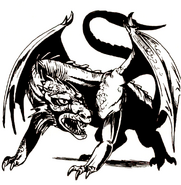 A pseudodragon from 2nd edition.

Another pseudodragon serving as a familiar.