Purple Dragon knights were the officers[1] and warrior elite of the Cormyrian army,[2] the bulk of which was known as the Purple Dragons. The Purple Dragons and the knights within distinguished themselves with courage and honor several times in the past[1] and being awarded knighthood within the Purple Dragons was a great honor for anyone from the Forest Country.[citation needed] On the battlefield they worked with the War Wizards in order to overcome the enemy.[1]

The knights' name came from Thauglor, an ancient black dragon who once dominated the area encompassed by the present kingdom. As Thauglor matured, his scales faded from ebony to violet .[3]

As knights of the crown, members of the Purple Dragons put their honor before anything else and would not bend it for any purpose and the order had high ethical standards for all its initiates. As such, Purple Dragon knights were servants of law and of good, though not always of both. But regardless of a Purple Dragon's individual feelings all were expected to do what was best for Cormyr and to serve justice, giving no rest to evil nor corruption.[2]

Purple Dragon knight training allowed members of the order to gain several special abilities that served them well in combat. New initiates into the order learned quickly how to make the best of a bad situation, pulling themselves together when bloodied and bruised so they could strike their foe once more. Purple dragons learned to rally their spirits and push onwards, even when things seemed at their worst. This aura of confidence inspired others to do the same, giving them further resilience against all the ills that might befall them in battle.[2]

Purple Dragon knights gained access to several useful exploits, many of which centered on their role as the commanders of their fellow soldiers. Rallying cry[2], sometimes called final stand,[4] allowed purple dragon knights to inspire their troops, giving them a potent edge in battle. Similarly, for Cormyr! was a resounding war cry shouted by many of the order which had the reverse effect, striking fear into the enemies of Cormyr. Rallying attack was a more purely offensive power, though still with a leadership aspect, for with each use of the exploit the spirits of the Purple Dragon's allies were roused.[2]

Many Purple Dragon knights also swore an oath, once per day, to destroy a single enemy in battle. This oath gave confidence and strength of resolve to the knight and so long as they were engaged in combat with that opponent, their morale remained strong and they were more potent in battle.[4] 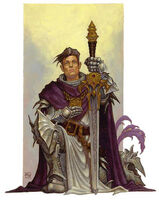 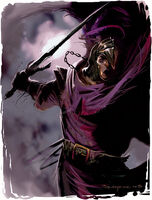 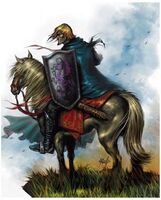 Retrieved from "https://forgottenrealms.fandom.com/wiki/Purple_Dragon_knight?oldid=357863"
Community content is available under CC-BY-SA unless otherwise noted.