Red
Rage drakes were brutish, nasty drakes that acted like little more than animals- albeit cruel and selfish ones.[2]

Rage drakes were cruel, brutal, selfish, and extremely aggressive, embodying some of the worst traits of dragonkind. They typically attacked any other creatures on sight. Although they were not mindless beasts, being intelligent enough to understand some Common and Draconic, they typically acted like one.[2][1]

Rage drakes lacked any of the magical abilities or even breathe weapon typically associated with their larger kindred, instead relying on brute physical power. However, four times each day a rage drake could enter into a ferocious, anger-fueled frenzy in which they fought even more viciously, but ignored their own safety in the process.[2]

Rage drakes tended to attack by pouncing directly into melee and using their claws and jaws to rake and tear into enemies. They fought and hunted more on instinct. If outmatched, they were as likely to fight to the death as to flee.[2][1]

Rage drakes typically lived alone or in pairs, preferring to dwell in colder forests.[2] Lone rage drakes were occasionally known to dominate clutches of guard drakes or spitting drakes.[1] Rage drakes were primarily carnivores, but would eat precious gemstones as snacks; they did not otherwise collect or hoard any sort of treasure.[2]

Adult rage drakes were impossible to tame, but exceptionally powerful individuals could bribe or bully one into serving as a mount, although this was risky, as rage drakes tended to turn on their riders, and were difficult to control while in a frenzy. A trained rage drake cost at least 15,000 gp. Frequent rewards of food, drink, and gemstone-snacks could keep a rage drake relatively loyal and happy, although it was no guarantee.[2] Rage drakes raised from the egg could be trained as mounts, guards, or pets.[1]

Some sages thought that rage drakes were purposefully created in an attempt to shape a mount with the physical prowess of a dragon but not the intelligence or magical abilities.[2] 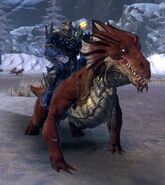 A dragonborn riding a rage drake.