The Spine of the World

Raika was a half-orc barbarian and adventurer of Waterdeep.[1]

Raika wore war paint over her face, and sometimes a helmet. The strong half-orc fought with spears or warhammers, and dressed in barbarian garb, made from creatures of her surroundings, such as snakes and bears.[1]

As a child, the half-orc was abandoned in the Spine of the World. However, she was found and raised by the Wolf Tribe. After growing up under the guidance of her tribe, Raika reached maturity and headed out to other places across Faerûn. She wished to create her own tribe of warriors, which she would lead. Raika believed she had found those worthy enough in Waterdeep.[1] 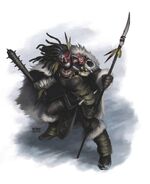 Raika as depicted in Dragonfire card game.
Add a photo to this gallery

Retrieved from "https://forgottenrealms.fandom.com/wiki/Raika?oldid=554931"
Community content is available under CC-BY-SA unless otherwise noted.