A rapier was a one-handed, martial melee weapon in the sword family.[3]

The rapier was a slender, sharply pointed sword often with a complex hilt designed to protect the wielding hand. The blade could be sharpened along some or all of the length of the blade or may not have any cutting edge at all. The blade was typically 1 inch (2.5 centimeters) wide or less and 39 inches (99 centimeters) or more in length.[citation needed] A typical rapier cost 20 gp and weighed 2 pounds (910 grams).[3]

Used mainly for thrusting and piercing attacks, it was favored by both fencers and duelists. Rapiers were relatively light blades and quite deadly in the hands of those properly trained, therefore they were classified as martial weapons.[citation needed]

Real-life rapiers had roughly the same weight as longswords and arming swords of the medieval era, usually between 1 and 1.6 kg and were often so long as to be unwearable at the hip. While optimized for thrusting, the long sharp blade worked well for slashing, making the historical rapier a cut-and-thrust weapon in the same general class as European arming swords (the longsword of D&D), longswords (wielded with two hands, light hilt unless it was a decorative piece, usually lighter than arming swords of a similar balance.), the Chinese jian, common migration-era swords, Celtic leaf-bladed swords, the Roman gladius and spatha and several others.[citation needed] 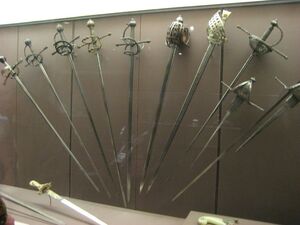 Various rapiers and what looks like two parrying daggers on the right. Zoom 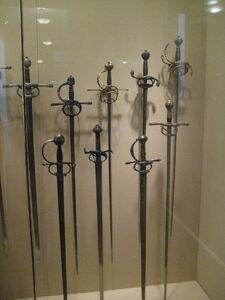 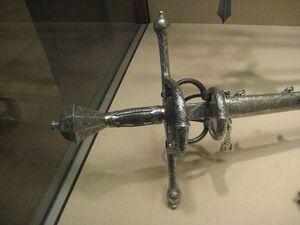 A rapier and scabbard elaborately decorated in silver. Zoom
Add a photo to this gallery

Retrieved from "https://forgottenrealms.fandom.com/wiki/Rapier?oldid=582203"
Community content is available under CC-BY-SA unless otherwise noted.