PC (MS-DOS, FM Towns, PC-98)
[note 1]
PC (Windows)
Mac
Linux
Ravenloft: Strahd's Possession is a computer game developed by DreamForge Intertainment in 1994 and published by Strategic Simulations. It is based on the Advanced Dungeons and Dragons 2nd Edition system, and was the first video game in the Ravenloft campaign setting, but began in the Forgotten Realms.[note 2]
“
TERROR AWAITS...

It waits in the form of Strahd, one of the most nefarious of all gothic characters ever imagined. Unveil and defeat this malevolent figure or you will never escape the terror of AD&D® RAVENLOFT™ game world!

Experience gothic horror role-playing at its very best in this visually stunning game! Immerse yourself in an eerily gorgeous gamescape, where subtle yet dramatically effective use of light enhances the macabre atmosphere. Interior and exterior visuals are simply breathtaking, animated sequences exquisitely smooth.

Presented in beautiful High Resolution 320x400 256-color VGA. Strahd's Possession delivers twice the quality of VGA without the cost of a Super-VGA card. Graphics stay razor-sharp and distortion-free, even close-up and at edges of the display.

This riveting tale unfolds in an exceptionally large 3-D gaming window. Explore bone-chilling dungeons. Challenge authentic RAVENLOFT™ game world creatures. Cast a multitude of mage and priest spells. Let auto-mapping keep track of your travels with maps that print - complete with any notations you made on them along the way. And, you'll love the frustration-free interface which includes inventory management for the entire party on one screen, and an intuitive point-and-click object manipulation system.

All this plus a story-driven character generator, a haunting musical score, digitized speech and sound effects will keep you on the edge of your seat for hours and hours!

Just be careful — things get pretty eerie when the sun sets!
”

The first-person role-playing game uses the same engine as Menzoberranzan. The two adventurers can meet characters all over the Demiplane of Dread and recruit them into their party.

Generally, the keyboard or mouse-driven directional arrows are used to move around or change perspective. As an early 3D game engine, it moves slowly and can appear cumbersome. However, there is an omnipresent map in the top corner which saves the player from becoming too disoriented by the slow and cluttered progress of the game.

The fighting system involves using the mouse to pinpoint enemies and click to attack, at which point party members take turns attacking. This unique combat system presents some logistical problems for the player, and seems to involve quite a learning curve.

It is a normal night for Key de Effer, of Lord Dhelt's personal guard. As he is patrolling outside his lord's bedroom door, a huge burst of magical energy appears from it. Entering the room a couple of seconds later, de Effer finds Dhelt and the mage, Baranta Chansil, sprawled on the ground after a battle with an assassin. However, it turns out that the assailant was not after the life of the lord of Elturel, but after his holy symbol of Helm. After making off with the amulet, he flees to the woods, being closely pursued by de Effer and his companion, Beatrice.

The assassin, with holy symbol in hand, fights off de Effer and Beatrice, but being wounded in the previous fight with Lord Dhelt, he eventually falls. The two adventurers search his body and find four possessions: the amulet, a note, and two evil artifacts. The assassin's note explains that he required certain items to be able to destroy Strahd von Zarovich, the ruler of Ravenloft. Strahd had subjected those of the assassin's home to doom and eternal captivity, and only with these items could he free his people. One of those items was the Holy Symbol of Ravenkind, and even though he did not wish Dhelt to come to harm, he had to do everything he could to acquire the amulet.

The heroes, artifacts in hand, begin their trek back to High Hall. However, on their way back, darkness and fog encircle them, taking them to the haunted woods outside of Barovia, in the Demiplane of Dread.

The game box's cover features a painting by artist Denis Beauvais, earlier used as the front cover to Van Richten's Guide to Vampires. 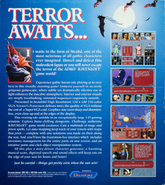