Same as Tempus plus The Retreat (Midwinter's day) and The Queen's Gambit (Tarsakh 1).

Non-chaotic clerics, crusaders, monks, and warriors of all types

Same as Tempus plus The Retreat (Midwinter's day) and The Queen's Gambit (Tarsakh 1).

The Red Knight, or the Lady of Strategy, was the Faerûnian deity of strategy and battle tactics and an exarch of Tempus.[3] Her dogma dictated the use of careful tactics in battle to achieve victory, under the belief that sound strategy was the best way to win a battle with the most favorable outcome. Her symbol was a red knight chess piece with stars for eyes.[11]

Main article: Church of the Red Knight
The Red Knight was worshiped by generals, tacticians, lawful-minded warriors and paladins alike.[11]

On Midwinter Day the Red Fellowship observed the Retreat. This solemn ceremony consisted of an assembly wherein the clergy discussed the previous year's campaigns. Strategies were discussed, battles analyzed, and the accumulated lore integrated into the church's teachings.[12]

On the 1st of Tarsakh, the clergy of the Red Knight held an annual festival called the Queen's Gambit. During this day-long extravaganza, the Red Fellowship unwound with feasting and gaming. Day-long tournaments of chess (also known as lanceboard, hence the Red Knight's second title, "Grandmaster of the Lanceboard") were held, with the tournament victors receiving recognition, titles of merit, promotions, and occasionally a gift from the temple armory.[12]

The Red Knight looked to Tempus as a father figure and it was only he who knew her true name. If anyone else discovered this they would gain insight into every strategy and every war plan throughout the planes.

Another ally of the Red Knight was Torm. The duo were well-known to be very close, but whether they were friends or lovers is something they've kept to themselves. She also worked closely with Valkur, god of naval warfare and another exarch of Tempus. Her enemies included Garagos and Cyric.[12]

She was known to have good relations with Tyr, god of Justice.

The Red Knight was elevated to divinity by Tempus to balance Garagos' destructive aims.[12]

During the Time of Troubles, the Red Knight's avatar possessed Lady Kaitlin Tindall Bloodhawk. While possessed, she and her adventuring band traveled to Tethyr and successfully repelled a large army of monsters, earning the nation's gratitude. However, she returned to her clan's stronghold to find it destroyed. She reconstructed the fort and declared it a temple to the Red Lady, and from them on it was known as the Citadel of Strategic Militancy. In time, it became the center of worship for the Church of the Red Knight.[13] Bloodhawk continued to lead the Order of the Red Falcon, a small knightly order worshiping the Red Knight that trained officers and others in tactics and military history.[14]

The Red Knight, or the Red Lady as she was known locally, was the patron of the ruling family of Ankhapur and her clergy trusted with the care of the Cup and Knife - the traditional symbols of the King's authority. This patronage ended in 1366 DR, when Janol Famisso took the throne and chose to favor Lathander. Of note is that in Ankhapur, the Red Knight was venerated by some as the Red Lord, a male deity, as opposed to elsewhere where she is exclusively considered female.[15]

Red Knight is described as one of the good deities that celestials can serve in the supplement Warriors of Heaven (1999).[18]

Red Knight appears in 3rd edition in the Forgotten Realms Campaign Setting book (2001),[19] and was further described in Faiths and Pantheons (2002).[20]

The Red Knight was described at length in the Sword Coast Adventurer's Guide (2015). 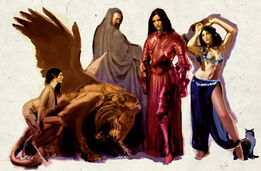 The Red Knight (second from right). 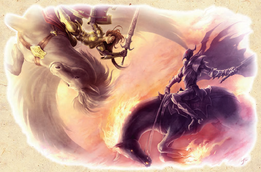 The Red Knight battles through wild magic to slay a fell foe.

Red Knight standing on a tower playing against Garagos with Jergal looming over their game. 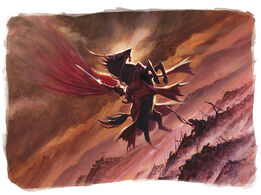 Red Knight appears above a battlefield.