The town of Red Larch was a waystop on the Long Road seven days north of Waterdeep,[1] and was located at the intersection of three trails. One trail led to the Bargewright Inn, another to Kheldell, and the third ran into the hills to derelict, monster-infested keeps. The town was named for a stand of red larch trees that were chopped down about the time of the town's founding.[2]

The town was located atop a low ridge along the western edge of the Dessarin Valley.[1]

Red Larch was known for its nourishing, though otherwise non-noteworthy food, called crumblecake. Crumblecakes were made into moist loaves from nuts, chickpea mash, chopped roots and greens, turkey and wildfowl scraps, all baked together.[1]

Around the Year of the Staff, 1366 DR, the town had a militia of around 100 skilled archers, mostly younger boys, who train by keeping predators away from the poultry farm, Mhandyvver's Poultry. This led raiding parties amongst the orcs to avoid the town.[4]

The town was named after a small forest stand of larches that extended along the ridge. The trees, however, were felled by the first settlers in the region,[1] who chose that particular location thanks to a natural water spring that fed into a small pond that could serve as drinking water for burden animals.[3]

In addition to the sites listed below, as of around 1366 DR, there was a farmer's market and a cattle market.[1]

Red Larch from Volo's Guide to the North. 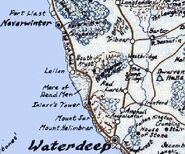 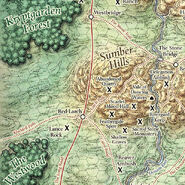 The area surrounding Red Larch, as shown in the 5th edition game.

A map of the town of Red Larch from the 5th edition game.