They resembled small, tough, and elderly human men or undersized wizened gnomes, standing around 3​ to ​4 feet (0.91​ to ​1.2 meters) tall and weighing around 50 pounds (23 kilograms). They had hunched backs, wiry muscles, leathery skins, and evil smiles filled with wickedly sharp, protruding teeth. They wore heavy iron boots, leather pants, and the bright-red leather pointed caps for which they were named; these were always soaked in fresh blood.[2][1]

“
As subtle as a flung battleaxe.
”
— Volothamp Geddarm[1]

Vicious and cruel, redcaps were insane serial killers who thrived on others' pain and dipped their caps in the blood of those they'd killed.[2] They desired only to murder and cause carnage and mayhem, and acted only to satisfy these bloody impulses. However, their instinct to survive and need to soak their hats in fresh blood was the root of their murderous nature.[1]

Favoring attacking head on, they had no sense of subtlety. Even when they tried to be stealthy, their heavy iron boots made them noisy and menacing, and clumsy except when rushing to the slaughter.[1]

Redcaps needed to kill constantly in order to continue existing, absorbing a little of the essence of everything they slew. Their pointed red hats needed to remain soaked in fresh blood,[2][1] which had to be replenished at least once every three days, otherwise the redcap would simply disappear, a fact they were entirely aware of.[1] The more they did this, the more their physical abilities enhanced and the more resilient and naturally armored they became. It took a cold iron weapon to overcome their unnatural durability. An elder redcap, one that achieved great age and many kills possessed terrible strength and agility and was practically invulnerable.[2]

Despite their small bodies and scrawny frames, they were actually fairly strong and relatively powerful, as capable as human-sized beings at swinging a large weapon or wrestling with a foe. They were fast for their small size.[2][1]

Their heavy iron boots made them noisy, but not slow. They could kick a foe to much injury and knock them down.[1]

When a redcap hurled a bullet from a sling, it glowed greenish-blue with an eldritch energy, and it struck harder than normal.[2]

When it died, a redcap vanished completely, leaving behind just one tooth, which had magical power. It made whoever wore it be seen a little more favorably by other fey and especially by other redcaps. It was valued at 1000 gp.[2]

Redcaps typically wielded scythes, sickles,[2][1] slings,[2] or other heavy bladed weapons that seemed much too big for them.[2][1] They favored attacking from ambush, usually as their prey were about to settle down for an evening. They began with their slings but swiftly closed to melee where they could swing their blades, hard and recklessly, before their victim could get their defenses up. They were brutal and merciless in battle.[2]

Elder redcaps used the same tactics, but would also track wounded or weakened prey for miles, just waiting for them to relax their guard.[2]

Redcaps could theoretically live as long as 150 years, but most died much younger, given their deadly lives.[2]

Redcaps were natural loners, and rarely banded together.[2][1] When they did, they did so only in odd numbers, forming small gangs of 3 or 5 or bands of 7, 9, or 11. Redcaps usually lurked within caves and old keeps and towers, usually abandoned after some tragedy or after they'd massacred any former inhabitants.[2]

With hot tempers, redcaps argued and brawled with one another incessantly, usually to the death. They would slaughter each other without hesitation. It required an elder redcap, even more than one, to reign in their tempers and murderous impulses, mostly by bullying the youngers into submission.[2]

Occasionally, a redcap would soak its cap in demon ichor instead of blood. This caused them to become an even more violent and volatile variant known as a madcap, who were known to incinerate upon their deaths.[3]

Once, in the mid–14th century DR, it was reported that redcaps were asexual creatures that spawned by budding. They did this only once or twice in their lives, growing a hump on their back for some six months. Eventually, it fell off, with head and limbs popping out. This newborn had to fight for its life as soon as it was spawned, soon making it voracious and cantankerous. It grew to full size in under a year.[2]

Later, in the late 15th century DR, it was claimed that redcaps arose from the very earth, and were born from bloodlust itself. At a site in the Feywild or where that plane touched the Material Plane at a fey crossing, where a sentient creature had acted on a powerful need for bloodshed and killed another, the redcaps would appear where the blood watered the soil. The newborn resembled a small blood-stained mushroom with a red cap, just emerging from the dirt. When bathed in moonlight, it leapt from the ground, fully formed, armed, dressed with a bloody red cap, and already blood-crazed.[1]

Redcaps could potentially be found all around Faerûn, but they were a special threat in the halfling realm of Luiren in the 14th century DR.[2]

Redcaps had a set of superstitions intricately interweaving with one another. In particular, they believed even numbers were unlucky, and thus would only carry odd numbers of coins and formed groups with an odd number of members. As easily as they killed one another, they refused to soak their caps in another redcap's blood, for fear of a curse. They believed rivers were home to water spirits that could steal their souls; thus, they washed themselves only in still water.[2]

They were not religious, but some dwelling near settlements of other races might worship their gods of slaughter. There were few redcap adepts, and much fewer clerics.[2]

Some redcaps worked for hags or evil wizards who knew how to summon them from the Feywild for some grisly work. A few redcaps spawned from bloodsoaked earth could sense the creature whose murderous impulse had led to their creation and might track them down, either to make them their first victim or be near a creature with the same bloodthirsty soul, to copy them or serve them. It was even possible for a killer to attract a small group of redcaps all spawned at the one murder site. But however they came to serve, redcaps insisted on being paid in blood and victims. Denying the redcap saw it extract its price from its former master instead.[1]

The night hag Mad Maggie commanded sixty redcaps and thirty madcaps from her home of Fort Knucklebone in Avernus, where she used them as sentries, among other things.[4][5] She didn't particularly mind if some of them were killed, as firstly she understood their violent nature enough to know they would attack people for almost no reason, and secondly she had more of them being delivered to her every so often from the Feywild.[4]

In halfling fairy tales, redcaps were said to be former halflings cursed with bloodthirsty rage as punishment for a terrible betrayal. However, these were just stories and nothing more.[2]

The redcap is closely based on Redcap, sometimes also known as Redcomb or Bloody Cap, a monster of Scottish and northern English folklore. 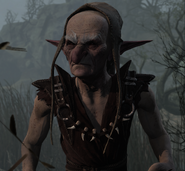