Edit
This article is about the collection of novels. For other uses, see Return of the Archwizards (disambiguation).

The Return of the Archwizards is a trilogy of novels by Troy Denning centered around the elf Galaeron Nihmedu, an Evereskan tomb guardian. 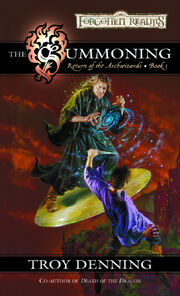 “
From the depths of the Demiplane of Shadow comes a new magic so mysterious it confounds even the Chosen of Mystra.

From beneath the dune seas of Anauroch escapes one of Toril's most powerful and ancient evils - the phaerimm.

From Evereska, the last elven refuge on Faerûn, comes word of invasion.

From nowhere appears a group of enigmatic sorcerers determined to destroy the phaerimm and save Evereska... for purposes known only to themselves.

The floating city of Shade escaped the fall of the mighty Empire of Netheril. The city and the powerful archwizards who rule it have been hiding in the frightening and mysterious demiplane of shadow for centuries. In The Summoning, the time has come for the floating city to return to the world of Faerûn and for the evil archwizards to begin an invasion that could enslave the free citizens of the Realms world! 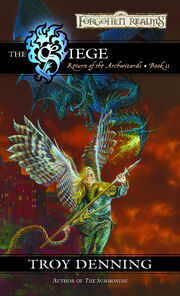 Main article: The Siege (Return of the Archwizards)

“
For Evereska, the last elven refuge on Faerûn, its battle for survival.

For the Chosen of Mystra, its potent rival for their goddess's dominion over magic.

For the human realms of Faerûn, its permanent shift in the balance of power.

For the lost race of powerful archwizards, it's a flying mountain they call home.

The world-spanning schemes of Shade begin to take shape, along with a new empire in the heart of the Great Desert.

The second book highlights one of the most intriguing developments in the Forgotten Realms setting: the return of powerful and mysterious villains who will affect the entire balance of power on Toril. 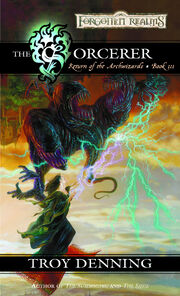 “
In the blasted ruins of Tilverton, demons stalk the shadows.

In Evereska and Cormyr, alliances crumble.

In the sun-baked desert of Anauroch, an empire of darkness is established.

In the soul of a tortured elf, the future is decided.

Tilverton is no more. Phaerimm surround Evereska. The High Ice is melting. Floods sweep through Anauroch. Elminster is still nowhere to be found. The greatest heroes of Faerûn are held at bay, and a flying city has taken up permanent residence in a world on the brink of destruction.

Promotional wallpaper of the cover art from the anthology and the Return of the Archwizards trilogy.
Community content is available under CC-BY-SA unless otherwise noted.
Advertisement