Light armor
Rogues were versatile masters of stealth, nimble combat, and various skillful tricks. Where other adventurers had the power to defeat their enemies, rogues used their wits and their natural resourcefulness to exploit their foes' vulnerabilities as well as to lead their allies safely through dangerous environments, disarming traps and opening locks along the way.[8]

Several well-known rogues of Toril include Ravenscar of Baldur's Gate, Regis of the Companions of the Hall, and Mirt of Waterdeep.[citation needed]

“
Thieves? Ah, such an ugly word... think of them instead as kings-in-training. Ye seem upset, even disputatious. Well, then, look upon them as the most honest sort of merchant.
”
— Excerpt from Shards and Swords[9]

Common to most cities in Faerûn, rogues were an incredibly diverse group, including burglars, assassins, and con artists as well as more lawfully employed persons, like locksmiths, investigators, exterminators, or treasure hunters.[10] To a large extent, the criminal sort of rogue was considered more typical and both thieves' and assassins' guilds were found widely throughout the world, some of which were incredibly powerful, such as the Shadow Thieves.[11] Regardless of their specific occupation, rogues shared a common affinity for cunning and daring feats of skill, as well as for getting into things others would rather be left unfound or unopened. Rogues of all sorts were resourceful and adaptable, having what could be called a “sixth sense” for avoiding peril, which helped them get out of the dangerous situations they often found themselves in.[12]

Rogues chose their daring lifestyle for a variety of reasons. Some were driven by profit. Others hoped for fame as well as (or instead of) fortune. A few were simply daredevils seeking the thrill of a real challenge. Because of these traits, rogues, although found on both sides of the law and equally as likely to serve good as evil, were often wary of lawfully aligned paladins.[12] Many rogues, regardless of motives or morals, worshiped gods such as Beshaba, Cyric, Mask, Oghma, Shar, Sune, Tymora, or Waukeen.[13] In addition to this, rogues had a variety of secret codes and languages, the most common of which being thieves' cant.[14]

Most rogues were primarily self-taught or learned their skills from a teacher, often a more experienced rogue. These more experienced rogues recruited apprentices as assistants in various jobs and schemes, allowing their students to develop their skills. Partings between mentor and student were rarely clean, however, and as a general rule rogues felt little camaraderie with other rogues unless they were part of the same guild. In fact, most rogues tended to view one another with even greater suspicion than they did non-rogues and most partnerships were short-lived.[15] A few gangs persisted via tight power structure such as in Calimport.[16]

Humans were among the best rogues, in large part due to their natural adaptability, which fit the modus operandi of most rogues to the letter.[15] Elves and halflings due to their physical agility, were also well-suited to the life of a rogue. Among the best rogues were those from the tiefling race, whose cunning and aura of confidence served them well on such a path.[17] Half-elves also made good rogues, though to a lesser extent,[15] as did dwarves of all kinds and rock gnomes or deep gnomes,[18] many of whom were renowned for their expert skill with disarming traps or picking locks.[15] Half-orc rogues were not entirely uncommon either, though such individuals tended to use veiled threats and brute strength alongside or instead of more subtle methods. Rogues could also be found among the more “savage” humanoids, particularly goblinoids.[15] Regardless of race, rogues were most common in Amn, Calimshan, the Cold Lands, the Dragon Coast, Evermeet, the Great Dale, the Lake of Steam, Narfell, the North, the Shaar, Tashalar, and the Western Heartlands.[18]

Rogues were deadly but somewhat vulnerable front line combatants, preferring to strike from the shadows and dart back into them, either excelling at ranged or light melee attacks.[19] All in all, in combat the rogue remained more interested in supporting teammates through the harassment of enemies — and slipping around to sneak attack — than in standing up to an opponent directly, as reflected in their choice of armor, which was typically leather or lighter. Some rogues played against this stereotype however and engaged in more brutal attacks, though still lacking the sheer combat endurance possessed by fighters, paladins, or swordmages. Rogues of all kinds were particularly skilled when wielding daggers or shuriken or when they had the opportunity to strike first.[17]

The greatest value of rogues lay in the fact that they were the handymen. Without pure battle or magical power, a rogue could contribute in ways as varied as disarming traps, scouting enemies, and persuading possible allies, using their wealth of skills. And while rogues were more physically fragile than most other adventurers, many possessed an ability to avoid danger that could seem uncannily supernatural at times. Similarly, the mind of a rogue could be described as “slippery” and many rogues were infuriatingly difficult to charm or enchant.[20]

Though all rogues retained training in stealth and the art of getting where they weren't supposed to be, many also had a varying degree of other skills. These skills were often dependent on the precise training of the rogue in question and most adhered, though not necessarily wholly, to one of the following martial traditions.

Aerialist rogues were, compared with other rogues, bold and swift thrill seekers, who deliberately put themselves on the edge of peril in order to test their skills or prove their worth. Like trickster rogues, aerialist rogues preferred to avoid damage, often through witty and distracting reprisals of their foes, rather than deal it. However, like brawny rogues aerialists were more than willing to face danger, if only to move swiftly out of its path as a taunt to their foes. In order to do this, aerialist rogues trained themselves to unusual extremes of physical ability, becoming acrobats whose stunts were often awe-inspiring feats of dexterous ability.[21]

While rogues had a reputation for guile and subtlety, fewer rogues subscribe to this philosophy than common perception suggested. While brawny rogues, like most of their kind, liked to get the sneak on their enemies, they preferred to do things with as much force as they can. Unlike other rogues, who might be concerned about avoiding death, brawny rogues were more concerned with meting it out to those whom they felt had it coming. Though these rogues could still act with subtlety or stealth, they weren't necessarily agile, charming, or witty.[22]

Cutthroat rogues were an unusual variety of warriors. Both charming and deadly, subtle and frightening, cutthroats used their natural charisma in a way far different from most other rogues. A brief and spiteful glance from a properly trained cutthroat could make his or her foe shudder and cutthroat rogues held to the philosophy that the best method of ensuring one got their way was through intimidation. But cutthroats also typically believed that the best method for instilling fear was a subtle one, looking down on the more overtly brutal methods of others. Cutthroats struck with swift and deadly force if necessary but generally preferred to cow their foes than kill them.[21]

In general, cutthroat rogues preferred the use of clubs or maces over the light blades favored by other rogues. The damage a cutthroat dealt was more often long-lasting than immediately lethal, with cutthroats twisting pain and fear into a dual set of weapons that could leave a mark within as well as without. This emphasis on slow and painful attacks came at the cost of deadliness and cutthroats were also generally less personable than other rogues. But for many cutthroats, the trade-off was more than fair.[23]

Trickster rogues preferred to use their charm and wit in concert with their agility rather than relying on brute strength. Subtlety was the mark of a trickster rogue, who found an affinity for exploits that allowed them to trick or misdirect their enemies. All trickster rogues carried this out to some extent in their attacks but a few carried this philosophy on to their defenses as well, and many rogues were adept at using their charm, wit, and ability to skew the perceptions of their foe in order to shift themselves out of harm's way. As a result, trickster rogues tended to be less powerful than rogues of other traditions, but gained additional control over the battlefield and how and when they chose to strike.[22]

Thieves were those individuals of the Realms that focused their skills on the liberation of goods and wealth that for a time belonged to others. While many pickpockets, burglars, and even bandits were counted among their numbers, other slightly more-reputable professions were also represented, such as dungeon delvers, treasure hunters, and explorers that specialized in ancient ruins. These individuals were often exceptionally dextrous, particularly skilled at moving stealthily, using fine tools (such as lockpicks), scaling up and down structures, and quickly getting out of harm's way.[2][note 1]

Assassins were those rogues that honed their abilities in the killing arts. While hired killers were among the most common of their ilk, some bounty hunters, political spies, and even agents of various churches acted as dedicated assassins for their various patrons. Assassins were experts at appearing entirely unremarkable in any setting, taking on the guise of others if needed, and finding the precise moment to strike down their target with ruthless efficiency.[2]

Those rogues that learned how to blend arcane magic with their ability to act quick and stealthily were known as arcane tricksters. They learned how to cast a narrow selection of spells, focusing on the schools of illusion and enchantment, perfecting those that best aided them in their craft. They were especially adept at wielding a phantom appendage to distract others or utilize their existing skills at a distance.[2]

Promotional wallpaper of a halfling rogue throwing a dagger.

Promotional wallpaper of a rogue on the battlefield.

Promotional wallpaper of a rogue performing an acrobatic maneuver. 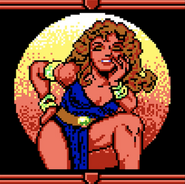 A human thief from Hillsfar. 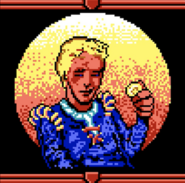 Another human rogue from Hillsfar.;;