Pasha Pook once owned a ruby pendant, and it was a key to his move to the top of the Calimport criminal world. The gem was stolen by Regis,[2][3] who left the criminal world[4] for Icewind Dale, where he used the ruby to gain the upper hand in the negotiation in Ten Towns.[5] Artemis Entreri was sent to find the gem and the hin and get them back to Pook.[4] 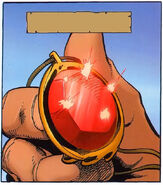 Pasha Pook's ruby pendant, as seen in The Crystal Shard comic book.
Add a photo to this gallery

Retrieved from "https://forgottenrealms.fandom.com/wiki/Ruby_pendant?oldid=572757"
Community content is available under CC-BY-SA unless otherwise noted.