A coin with a nail driven through it.

3000, not including their thousands of employees

Knights of the Shield, Tashalaran Yuan-ti

The Rundeen were a slaving and mercantile consortium that operated in the southern Sword Coast and the Chultan Peninsula.

They were originally a Tashalaran merchant company that operated during the Shoon Imperium.

When the Knights of the Shield tried to expand their influence to the Chultan peninsula, they were rebuffed by a group calling themselves the Rulnadeen. Upon investigating their new opponents, the Knights realized that it would be much simpler to agree to the merchants' demands and join them as members of their group rather than get rid of them. Being more experienced in trading with foreign powers, several Knights quickly became high-ranking members of the Rulnadeen while they themselves achieved a foothold in Calimshan.

When the Shoon Imperium finally fell in 450 DR, both the Knights and the Rulnadeen saw an opportunity to fill the power vacuum left behind. The Knights tried to take over their southern partners but were prevented from doing so. Angry, the Rulnadeen gave an ultimatum to the Knights who had joined them: sever all ties to the Knights or leave forever. Most chose to leave but it was the Rulnadeen who had the upper hand in Calimshan. Affiliated memberships in exchange for dues were offered to various merchant houses and a protection racket was set up for trading ships. Soon, only ships protected by the Rulnadeen were safe to travel in Calishite waters and without imperial soldiers only the affiliated mercantile groups were safe from the political turmoil on land. Almost all traders not affiliated in some way found themselves unable to trade at all and it wasn't long until the Rulnadeen had a monopoly on all trade into and out of Calimshan and the Chultan Peninsula.

Of course, this drew the attention of meddlesome outsiders and, in 1349 DR, Harper assassins killed three of the five Grand Yrshalem as well as fifty of the group's agents and representatives. The monopoly in Chult had been broken and their activities in Calimshan had been disrupted. In retaliation, the Rundeen captured, interrogated, and executed any and all Harpers they could find, vowing to never offer quarter to a Harper again.

The leaders of the Rundeen were known as the Yrshelem,[1][2][3] an Alzhedo word meaning "coin-collector(s)".[1][2] There were five "Grand Yrshelem", and under them were fifteen "First Yrshelem".[1][2][3] Serving the First Yrshelem was a group known as the Mitalibbar.[1][2][3] Each mitalib— a word meaning "watcher"[2]— was an agent tasked with observing Rundeen operations in his or her city.[1][2][3] The Mitalibbar had ranks, in order of importance matching the value of the old coins from the Shoon Imperium—the highest ranking Mitalibbar were called nirdeen (platinum coins), those of the next rank were tardeen (electrum coins), and the those of the lowest cardeen (copper coins).[2]

The Rundeen desired profit above all else. Pretty much every avenue of making money was explored, though legitimate trading and slaving seemed to be the most profitable of these options. They had contacts throughout Faerûn and made most of their profits sending local goods to far-off lands. Rival mercantile groups could expect to find themselves victim to piracy and banditry while the most promising merchants were offered affiliate memberships which brought great benefits in exchange for a portion of their profits.

Although eliminating Harpers was a secondary goal, it was always the highest of priorities when they were discovered. 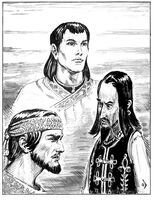 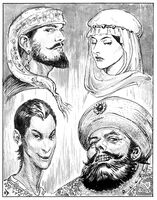