Yellowish tan on the belly and rust-red on the back
A rust monster was a creature that corroded and ate metal.[6] They were favored by the Mulhorandi god Geb, the dwarven god Abbathor, the gnomish god Flandal Steelskin, and the Duergar gods Laduguer and Deep Duerra.[7]
“
Destroyed me hammer and me axe, it did. Put me faith to the test that day, it did.
”
— Brawn Thunderstones, dwarf paladin of Dumathoin[1]

A rust monster was the size of a small pony, with four insectlike legs and a squat, humped body. Its hide was thick and lumpy and was yellowish tan on the belly and rust-red on the back. Its tail ended in what looked like a double ended paddle. Two long antennae come out of its head, one under each eye.[6]

Normally a docile creature,[1] a rust monster could smell metal from ninety feet away. They always went for the biggest source of metal first, and preferred ferrous metals over precious ones.[6]

A rust monster had a weak bite and did not normally attack with it.[6] They attacked anyone who had metal, however, with their antennae. The touch of an antenna could turn even magical metal items into rust.[6]

Some sages speculated that rust monsters might be related to or the larval form of rust dragons[8] The extremely few rust monsters who lived long enough to reach old age somehow transported themselves to the plane of Acheron, where they ravenously consumed the abundant metal from the plane's cubes for about one year. Afterwards, they encased themselves in cocoons made of spun metal, where they stayed for three years. Following this period, they emerged from their cocoons as rust dragon wyrmlings.[9]

Rust monster antennae were used in the creation of rust blades. They found these items extremely delicious and nourishing.[10] 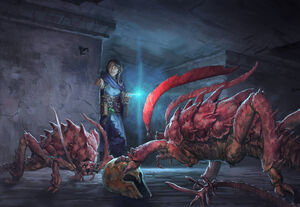 A pair of rust monsters in the Arcane Chambers of Undermountain 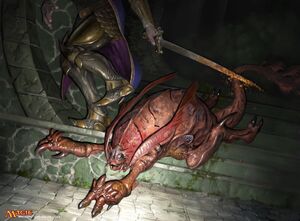