Blackmoor (called "Devil Men of the Deep")
Sahuagin (pronounced: /sɑːˈhwɑːgɪn/ sah-HWAH-gin[6][7]) were a fish-like monstrous humanoid species that lived in oceans, seas, underground lakes, and underwater caves. Sahuagin spoke their own language, though some were known to also speak Common, Abyssal and Aquan.[2][3][1] Sahuagin could also communicate simple concepts to nearby sharks using telepathy. [8]

Although the correct term to address them as a race was sahuagin, those that fear or despised them usually called them sea devils or even more derisively, fish heads.[9]

Sahuagin were usually green-skinned; darker on the back and lighter on the belly. Many had dark stripes, bands, or spots, but these tended to fade with age. An adult male sahuagin stood roughly 6 feet (1.8 meters) tall and weighed about 200 pounds (91 kilograms). Sahuagin were highly fish-like, with webbed feet and hands, gills, and a finned tail. There was additional webbing down the back, at the elbows and, notably, also where human ears would be.[10] Some sahuagin developed towering physiques, reaching 9 feet (2.7 meters) tall.[11] The larger beings usually rose to higher positions, as the savage nature of the sahuagin enabled challenges to the death for higher status.[12]

Females developed specks of yellow on their tails, which would grow in number until the whole tail was of a deep yellow color. At that point, the female was no longer considered fit for mating.[12]

About one in every 216 hatchlings possessed four functional arms. Known as "barons",[1] these four-armed mutations were often black, fading to gray in color. While sahuagin usually killed off defective hatchlings, they allowed these to live.[13]

If a sahuagin abode was near a sea elf community or was frequently visited by a sea elf, a strange mutation occurred within the sahuagin clan. About one in every 100 hatchlings appeared to look like a sea elf with greenish-silver skin and green or blue hair. These mutants were called malenti. Malenti were shunned by the clan as whole, but were protected by the clan's ruler and raised as spies by the clans best warriors and the priestesses.[13]

Savage fighters, sahuagin asked for and gave no quarter; not even to children or babies.[14] They had wide and powerful jaws filled with long, sharp fangs, which they often used in battle. When swimming, a sahuagin tore with its feet or hands, striking with its talons or a weapon. Spears and tridents were their favored weapons, which they often coated in a poison they prepared.[15] About half of any group of sahuagin were also armed with nets that were laced with barbs.[5] Especially when in groups, they rode mantas as a means of transport to assault ships and other vessels.[9] They also used sharks as allies in battle, but the number of sharks they could control was limited to an unknown amount.[16]

Although they excelled in physical prowess, they greatly feared magic, so they never tried developing or studying it for any purpose. Only priestesses of Sekolah used clerical magic granted by the god and even that magic was regarded with fear and as a necessary evil.[12]

Sahuagin were the natural enemies of aquatic elves and lizardfolk. Elves and sahuagin could not co-exist peacefully, and wars between them were often prolonged, bloody affairs that occasionally even interfered with shipping and maritime trade. Sahuagin tolerated the lizardfolk much more than they did the elves. Sahuagin had an only slightly less hatred for tritons. Exactly why the two races hated each other so much was unknown.[17]

They also hated the kuo-toa and the morkoth, though it was not unheard of for these races to ally on occasion.[citation needed] They often raided Yurian villages, considering them a delicacy.[18]

Sahuagin lived in underwater settlements that also had underground passages and tunnels, which connected the houses above the floor. Their society was strictly patriarcal, with a king ruling over princes, who in turn ruled over barons. Each baron ruled over a village, while a prince would dominate twenty villages and a king would govern an entire coastline. Kings would administer cities of several thousands inhabitants, and their palace were always much bigger than any of the other buildings in the area. Although they didn't rule, females had similar hierarchies among teachers, lore-keepers and priestesses.[19][20]

They also had a very particular way of keeping lore, using what they called singing bundles—conchs and shells supported by bone and sinew. When shaken, they made the clicking and hissing sounds of sahuagin language.[12]

Multiple births were frequent among sahuagin and they dealt very harshly with offspring who were not robust or aggressive enough, eliminating them through compulsory fights to the death between the young. Sahuagin seemed fixated on all aspects of consumption and were eager to weed out anything they saw as weak or unworthy to compete for resources.[21]

When going to war, sahuagin followed a certain protocol called the Laws of Battle. Sometimes however, a group of the sea devils would form a so-called Wild Hunt, which went on a frenzied rampage ignoring all rules.[22]

Sahuagin worshiped Sekolah, god of sharks, as their patron deity and the father of their race. They also perceived him as the ultimate adjudicator and incarnation of punishment, officiating over an endless struggle between mythic figures. These figures were the hunter: "He Who Eats", and the hunted: "He Who Is Eaten", with the struggle between them reflected in every aspect of life. Because of this, sharks were seen as holy creatures to them, and dolphins were hated for their friendship with aquatic elves. The sahuagin made regular, living sacrifices to Sekolah by feeding beings to the sharks that followed every sahuagin priest.[citation needed]

A depiction of a sahuagin in the 1st edition accessory AD&D Monster Cards.

A group of blood frenzied sahuagin attempt to fight a killer whale.

From Hatchlings to Kings.

A orange sahuagin rides atop a giant eel on a red saddle.

A sahuagin from the Sea of Swords. 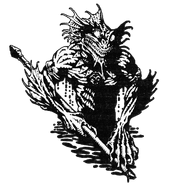