The country was virtually unexplored by people from the civilized lands as it was incredibly difficult to get to. It was surrounded by rugged mountains and to the northwest were the jungles of Chult.[3]

To Faerûn at large, Samarach was a nigh-mythical kingdom of the south.[4] Tashalarans described Samarachians as cowards who at night shut themselves in behind the walls of their cities. They apparently hid the passes through the mountains and the roads to their cities behind illusions.[3] The country was created by the Nimbralese, which would certainly explain their propensity for illusions.[1]

Samarach had limited trade relations with the neighbouring nation of Thindol.[5]

In 605 DR, large numbers of yuan-ti having infiltrated the courts of the nation of Thindol, including the reigning monarch and his family, were exposed, throwing the nation into a state of anarchy and launched the War of Unmasking which lasted until the following year.[5] During the chaos of the civil war, which ended the monarchy of Thindol and caused the slaughter of thousands of innocent citizens, as any and all who were suspected of containing serpentine blood were killed, the people of western Thindol collectively fled the nation by sea for the island nation of Nimbral.[5][6]

The Thindolese flotilla of ships struck against the Beacon Rocks due to a great storm. Above the remains of the flotilla, a legion of pegasus-mounted Knights of the Flying Hunt appeared and commanded the Thindolese to return home. However, upon hearing the pleas of the Thindolese, the leader of the Nimbralese legions, Lord Samar, agreed to join the Thindolese and drive off the yuan-ti.[6]

After returning to the Chultan peninsula, Samar cloaked the mountains of the region in powerful illusions and then began a decade-long hunt for yuan-ti and their agents within the region. By the end of the War of Unmasking in 606 DR, the people of western Thindol had declared their independence, naming their rescuer Lord Samar their first ruler, and naming their nation Samarach in his honor.[5][6]

In 1385 DR, Samarach and much of the Chultan Peninsula were decimated by the Spellplague and pulled beneath the sea.[7]

By 1489 DR, though the landmass of Samarach had returned, the civilization was no longer believed to exist. However, surviving illusions masking roads and passes in the nation made it difficult to truly discern developments there.[8]

As across much of the South, monkey spiders were popular in Samarach as companions, familiars, and pets, which led to grubby illicit auctions of them in back alleys and some marketplaces. For the intelligent apes, these constituted slave auctions, and some escaped their masters. Rumors claimed that, in Samarach and throughout the South, these escaped monkey spiders had developed an underworld network ruled by inch-high tyrants. Supposedly, monkey spider spies eavesdropped on every important meeting, communicating what they learned to the monkey spider kings, who then acted through sympathetic humans and demihumans to influence the affairs of nations.[9] 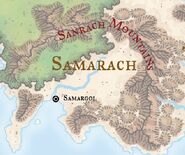