Satyr (Greek)
Satyrs, also known as fauns or the Free Folk[7], were fey creatures that delighted in singing, dancing, feasting, and debauchery.[1]

Satyrs looked like male humanoids of stout build, with fur-covered lower bodies and legs and cloven hooves similar to those of a goat. Similarly, goat-like horns topped their heads; these came in a variety of shapes and sizes, from small nubs to big curling ones akin to a ram. They were typically seen with facial hair.[1]

They had only a male sex, as female satyrs was a phenomenon that just never naturally occurred.[4]

Satyrs were well known for being curious and incredibly hedonistic. They were willing to go to any length to achieve their desires, giving little thought to the results of their actions, and often roped other creatures into participating in debauchery.[1]

When facing a foe, satyrs were typically known to fight with either a shortsword or shortbow. Their most notable weapon was a set of pan pipes that induced a variety of magical effects on their enemies, including charming, frightening, and lulling them to sleep. Other satyrs were immune to the effects of these pipes.[1]

When weapons were not available in close quarters situations they often would simply ram their opponents with their heads.[1]

Due to their hedonistic nature, satyrs were known to frequently join in the celebration of holidays regardless of what they were for.[1]

Satyrs in elven woods were known to believe that it was lucky to see a dragon when it was raining.[8]

Being an all male race, the satyrs required mating with other creatures in order to reproduce. These creatures were specifically their fellow fey, the dryads[4][9] and oreads.[9] Though they also shared the dryads' affection for humans of the opposite sex.[4] Such pairings were likely to result in a child that was a half-fey human, rather than a true satyr.[10]

The one known exception to the near multiversal constant of satyrs being a one—sex species was the plane of Theros. The satyrs native to this plane exhibited both males and females in their species.[11]

Satyrs once dwelt in Brynwood in the Vast, but came into conflict with the local korreds over territory. In the ensuing strife, both races fell before monstrous creatures. Afterwards, few of the satyrs remained.[12] In west Faerûn, they could be found in the Cloak Wood.[13]

Some could be found within the forests of Rashemen.[14]

As of 1368 DR, satyrs occupied the northern areas of the Chondalwood where they patrolled the Old Road in an attempt to ward off human caravans and travelers. They were allied with centaurs and wood giants that also inhabited the forest.[15]

Satyrs were often known to serve unicorns whenever one dwelled within their forest.[17]

Due to their hedonistic love of alcohol there were many taverns named for them, such as the Saucy Satyr Club,[18], the Silly Satyr,[19], and the Smiling Satyr.[20]

A group of satyrs party in the woods with a human woman. 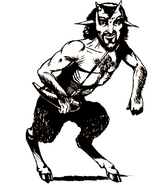 A satyr from 2nd edition.