The eye of Savras (dagger)

Crystal ball with countless eyes of many different types dancing inside

Savras (pronounced: /ˈsɑːvrɑːs/ SAV-ras[2]) was a god of mages and wizards in the service of Mystra, goddess of magic. Some said he was once a mortal, one of the mighty mages who constructed the portals beneath the city of Ravens Bluff.[citation needed]

He was portrayed as a man with a crystalline face, clear to all who saw him. His statements were clear, concise, and rarely what the listener wished to hear. Savras' symbol was a crystal ball with many monstrous eyes.[citation needed]

Savras, along with Velsharoon, served Azuth, who was his superior, and thus served Mystra indirectly. Following some dramatic events, he had a cold relationship with Azuth, which had steadily grown to a mutual respect.[citation needed]

Savras was worshiped in both the north and south as both a god of diviners and truth-speakers. His clergy was still sparse in the late 14th century DR, as Savras had just been released from his centuries-old prison. Savras's only famous servant was Alaundo of Candlekeep, the one true prophet of the Realms.

Savras was particularly beloved in the nations of the Chultan Peninsula (Tashalar, Samarach, Nimbral, and so on, where scrying and spying were practically the national pastimes because the inhabitants' fear of the yuan-ti.[7]

The Gurs were known to worship Savras, which may explain the survival of his faith during his long period of imprisonment.[8]

The most devout worshipers of Savras carried around elaborate staves with them at all times. This was in the hope that their god might make their staff his temporary residence.[9]

Benign Order of the Third Eye
A secret cult would seem to be anathema for a god devoted to finding the truth, but in 1371 DR such a cult did form. Consisting mainly of archivists (and incidentally containing the highest concentration of archivists of any group in the Realms) the Benign Order of the Third Eye's members were all granted a vision from Savras where he impressed upon them the need to collect magic and lore in preparation for an upcoming battle with Cyric. Unfortunately, the Order was overzealous in its search and became known for graverobbing.[10]

Following this, Azuth agreed to release Savras in exchange for a pledge of fealty.[citation needed]

An unthinkable catastrophe ensued when Cyric, aided and abetted by Shar, murdered Mystra in Dweomerheart. The plane itself disintegrated at once, destroying Savras and sending the gods Azuth and Velsharoon reeling into the endless Astral Sea.[citation needed] 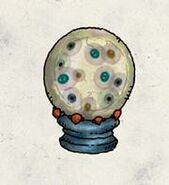 A holy symbol of Savras.