Forgotten Realms Wiki
Register
Don't have an account?
Sign In
Advertisement
in: Locations, Locations on Toril, Locations in Faerûn,
and 8 more
English

Scardale, labeled as one of the trading dales, was one of the valleyed regions that made up the Dalelands in north Faerûn. Historically it has been the largest and often the most powerful of the Dales, the latter half of the 14th century has been a time of upheaval. [2] It has persevered through wars, enemy occupation and even a major plague; where other dales, such as Teshendale, have fallen, Scardale has survived.[1] In the 15th century, it finally succumbed to the influence of Sembia and thus, fell under Netherese rule.[3]

The main feature of the dale was a the massive chasm known as the Scar, which enveloped the River Ashaba as it poured into the Sea of Fallen Stars. While this tributary formerly had the most concentrated population of Dalesfolk, as well as housed its largest city, it has waned in importance over the years.[2]

Like most of the Dalesfolk, the residents of Scardale were sturdy, salt-of-the-earth types. While many of the towns and villages prospered, even during the coalition occupation and following recovery, there were settlements like Scardale Town that existed in near anarchy. Due to the tumultuous history of that city in particular, the power of the dale rested in its burgeoning farmlands and rural mercantile communities.[1]

For years, Scardale had been ruled by a line of rulers of the Aumersair dynasty, the last of which was Lashan Aumersair.[2]

After the Second inter-dale war ended with the would-be-conqueror Lashan, the coalition of foreign forces who stopped the warlord created a provisional lordship for the Dale, seated in the coastal capital of Scardale Town. This office of power was supplemented, or more correctly overseen,[2] by 13 parliamentary advisers from those now-occupying nations, which included Cormyr, Hillsfar, Sembia, Zhentil Keep, as well as garrison commanders from the other Dales.[1]

Myrian Beechwood, a former cleric of Waukeen who greatly aided the people of the dale following its occupation by these coalition forces, held the title of Lord during this period. Considering the dale's parliament could never agree on an issue and he needed their authority before making decisions or taking action, he was left an ineffectual ruler. Despite his political position, Lord Beechword constantly fought for the dale's independence and refused to allow himself to act as a puppet ruler for any one of the occupying factions.[2]

After the shaking plague ravaged Scardale Town in 1370 DR, the dale transitioned to a nine-seat council led by a Provisional Governor in Chandlerscross. Four members each were chosen from the cities of Chandlerscross and Scarsdeep, while the ninth was selected randomly from among the farmlands along the River Ashaba.[1]

Following the resignation of Lord Beechwood the same year, Khelvos Dermmen, a cleric of Torm, was elected as Provisional Governer.[1]

Prior to the civil war, trade was the driving force in Scardale. This was closed off for years following Lashan's defeat, perhaps in order to limit the dale's influence.[4]

During the occupation, more seedy busines practices such prostitution, extortion and banditry were rampant Scardale Town and the surrounding area. The country folk managed to get by with simple bartering, and by 1367 DR had began to travel to Harrowdale or Yhaunn to sell their locally-made goods.[4]

Legend tells that the eponymous landmark known as the Scar was created by a god centuries in the past. It was the result of an errant sword slash by the patriarchal elven deity Corellon Larethian, during his fabled battle with the orc god Gruumsh.[5]

Shortly after Lashan Aumersair inherited the lordship of Scardale from his father Uluf, both descendants of the great wizard Elminster,[6] he began a campaign to seize wealth and power in preparation for larger conflict. This offensive culminated in with the Second inter-dale war, a campaign that saw Lashan and his army conquering the southern dales of Harrowdale, Featherdale and for a brief while, Battledale, in an attempt to conquer all the Dalelands under one ruler.[7]

He was defeated however and went missing after his invasion of Mistledale by the people of that land, their allies in Shadowdale[7] and the hastily-assembled coalition of concerned nearby nations including Cormyr, Sembia, Hillsfar and even Zhentil Keep.[8]

In the same year of 1356 DR, these aligned forces installed a new government in Scardale, a provisional Lordship held by the cleric Myrian Beechwood. The coalition presided over their authority with a 13-member parliamentary council in order to both maintain their interests and influence over the region and keep a check on the power of Scardale as a whole. While Lord Beechwood was acknowledged as their ruler, the people of the Dale knew true authority rested in the often-deadlocked parliament and as a result, effectual leadership fell to appointed, garrison commanders[2]

The local farmers and country folk remained self-sufficient, and exercised their independence during these years. They saw the imposed parliamentary government as an occupying force and yearned for the "good-old-days" when Scardale was respected, even feared, by the neighboring dales. Some even hoped for Lashan to return to the dale, and restore them to their former glory.[2]

Over the next decade, the different foreign powers that had a foothold in the dale waxed and waned in power. The Cormyrian troops had left, accompanied by the forces of the other dales, and the Hillsfarian remnant had been bribed to the point of ineffectuality.[7]

By 1370 DR, Sembia had emerged as the strongest of the occupying forces and had planned to run out the remaining Zhents from Scardale. Before they could seize the dale for their own, the capital city of Scardale Town was hit by the sickness known as the Shaking Plague. Although the surrounding countryside and nearby towns were largely unaffected, the city was devastated, losing over half its population. The Sembian garrison was all but completely annihilated, with only three surviving members.[7]

In the years to follow the capital city would deteriorate into a lawless haven for gangs, criminal organizations, religious cults and agents of malicious intent. Various groups such as the Red Wizards of Thay and the Monks of the Long Death used the ensuing chaos of the city to open bases of operation, while the Zhentarim and Silver Ravens of Sembia had their own interests and views on the future of the region[7]

Following their establishment as a governing body, Khelvos Dermmen and the rest of the council renamed the town of Chandlerscross as the capital of the Dale. They began an effort to get Scardale back on its feet in earnest, and retain their former power and authority within the Dalelands.[5] While some had completely written off Scardale Town as salvageable, others worked on the problem of re-establishing the rule of law.[7]

Some time before the year 1479 DR, Sembia managed to completely exert their control over Scardale. Just as Netheril had dominion over Sembia, so too did it hold sway over Scardale. Scardale Town was re-established as the capital city of the dale[3]

River Ashaba
This roaring river ran eastbound through Scardale, through the Scar and emptied into the Sea of Fallen Stars.[1]

The Scar
This massive gorge, after which the dale was named, was fed from Feather Falls on the west and enveloped the River Ashaba during its final leg until it poured into the Sea of Fallen Stars.[5]

Sea of Fallen Stars
The massive inland sea was a source of much of the trade that went through the dale prior to the war[4] and decline of the port city of Scardale Town.[7]

Chandlerscross
This town served as the seat of power for the dale after the fall of Scardale Town.[5]

Scardale Town
The former-largest city of the Dalelands was ravaged by the shaking plague in 1370 DR, losing over half its population.[5]

Scarsdeep
A prosperous town whose emerged in power following the coalition occupation.[2] 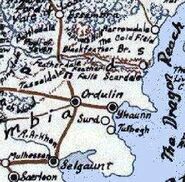 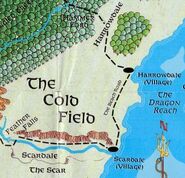 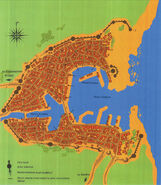 Novels
Tantras
Referenced only
The Ring of Winter • Shadowbred