Understood the languages of its creator but could not speak[1]

6' (1.8 m)[3]
Scarecrows were terrifying killer constructs animated by the spirit of a slain evil creature.[1]

Typical scarecrows were constructed from a stuffed sackcloth roughly shaped like a humanoid, then animated through binding with an evil spirit. Any creature could provide its spirit to animate a scarecrow, but different creators had different preferences. Hags and witches, for example, tended to prefer the spirits of demons.[1]

Scarecrows were stalwart defenders of their creators. They had an unwavering allegiance to them, following their commands even long after their masters' deaths. Some scarecrows were loyal to the point of even seeking revenge for a slain master.[1]

The spirit bound to a scarecrow could retain some traces of its former personality, but it did not carry any of its memories.[1]

The unnerving sight of a scarecrow alone could terrify its victim to the point of paralysis. They were expert fighters with their razor-sharp claws, which were particularly effective against paralyzed targets.[1]

Due to their construction, scarecrows were resistant against most ordinary weapons, but were particularly vulnerable to fire.[1]

In the late 15th century DR, scarecrows terrorized a few outlying farms in the Undercliff ward of Waterdeep.[6] 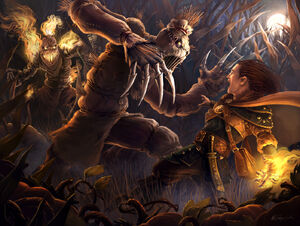