"Scrag," "aquatic troll," and "marine troll" could refer to any troll that lived in water.[5] However, "scrag" often referred specifically to a freshwater troll, also called a "river troll" or "hool"[8]. In that case, a saltwater troll was called a "marine scrag."[4]

A scrag is a marine troll, a gilled form of the common troll. A scrag is found in a large body of water, as it needs considerable room to hunt. The coloration of a scrag runs from blue-green to olive, and its forelimbs are shorter and weaker than ordinary trolls. The freshwater scrag is smaller than a normal troll and has heavy scales and less formidable claws, but its enlarged lower jaw bears many small, very sharp fangs. The saltwater scrag is found in seas and oceans, and is at least as large as an ordinary troll. A saltwater scrag has thick and heavily scaled skin, and some of them are intelligent enough to further protect themselves with armor made of shells and sharkskin or similar substances. A saltwater scrag's forelimbs are shorter and weaker than those of an ordinary troll, but it has developed a huge maw and numerous fangs. A scrag regenerates as a troll does, but only when immersed in water of its natural element.[5] Saltwater scrags could however, breathe fresh, salt, and mixed water without suffering any ill effects.[9]

Scrags did not use tools or weapons, living simple, barbaric lives. When attacking, they would swing their claws with abandon at anything that moved, biting anything that got close enough. If attacking the seagoing vessels of the land-bound races, they would claw into the hull and climb over each other to get onboard and wipe out the crew.[10]

Scrags could only regenerate when in water: Freshwater scrags had to be in freshwater, and saltwater scrags had to be in saltwater.[5] Like their land-bound cousins, they could only be truly harmed by acid and fire—two substances that are much harder to find underwater. Locathah, however, had found that starcoral, a coral that grows ten times as fast as other corals, was nourished by saltwater scrag flesh, and weapons made from it could be used to disrupt a scrag's regeneration.[11] They would then dismember it and stuff the wounds with small pieces of starcoral.[10]

Saltwater scrags found light, even that of merely a full moon, uncomfortable. They would therefore rarely approach the surface of the sea unless it was at night.[12]

In Serôs at least, scrags were matriarchal. One female chieftain/shaman would lead a pack or small tribe of scrags, using her shamanistic magic and slightly increased intelligence to find prey for her lessers in exchange for her pick of mates.[10] Three or four scrags, led by their chieftain, would go out to secure food for the rest, though the chieftain would rarely join in the attack.[10]

Saltwater scrags preferred to live at depths of between 300 and 600 feet below sea level.[13]

Scrags were found in the Mortick Swamp in Luiren;[14] in the Mere of Dead Men in the Sword Coast North;[15] in the Moonsea,[8][16] where large colonies resided near Hulburg[7][17] and on the island of Maos;[18]; off the south coast of Impiltur, where they practically contolled the waters in the region[10]; and in the Shining Sea, where they lurked in the sunken ruins of Untisczer.[19]

In the Underdark, scrags were found in the Darklake[20][21] and in the Shape of Water in the Glimmersea.[22]

Another Scrag from the Legend of Drizzt comic omnibus.

A scrag from Icewind Dale: Heart of Winter. 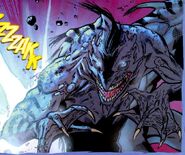 A scrag moving out the way of a magical effect.

Two scrags fight a group of aquatic elves while a dolphin watches.

A scrag from 2nd edition.

Tritons battling a group of scrags, among others.