Edit
This article is about the sourcebook. For the inland body of water, see Sea of Fallen Stars.

[cite this]
Sea of Fallen Stars is a sourcebook set in the Forgotten Realms for the Dungeons & Dragons 2nd-edition ruleset. It explores the world above and below the waves in the Inner Sea.
“
For years beyond measure, folk of Faerûn have sailed and swum the Inner Sea from the Lake of Dragons to the Alamber Sea, but few believed there was more here than a vast expanse of blue water filled with fish, a few sea monsters, and ever-present pirates. Come, take another look and discover new worlds above and beneath the sea. Once you enter the Sea of Fallen Stars, you may never want to go home again.

Atop the Waves: Examine life on the Inner Sea from the major ports and common superstitions to the goings-on in the Pirate Isles.

Beneath the Seas: Discover the worlds within the Sea! Visit Serôs, an ancient land. Meet the enigmatic shalarin, a magical sea people from unknown oceans. Join the mysterious Dukars, magical defenders of the depths.

Myth Nantar, City of Destinies: Wrapped in a magical mythal, the elven city of Myth Nantar is the perfect place to make the transition to the world under the waves or to begin a complete aquatic campaign.

Sea of Fallen Stars is the first fully developed underwater setting for AD&D campaign play. It provides a focus for the use of the rules supplements Of Ships and the Sea and Sea Devils, but neither of these products is needed to use this book. Contained in these pages is everything you need to adventure in this exciting world. Bring your game beneath the waves with rules and magic that make is easy and fun to do, or create sea elf, merman, triton, locathah, or shalarin PCs using the character-creation rules herein. Either way, get ready to explore Netherese ruins, sunken ships, and abyssal trenches in the Sea of Fallen Stars!
” 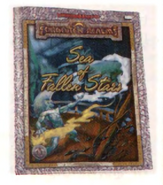 An early preview image of the Sea of Fallen Stars, from Dragon #260, 261, and 262 that displays a different cover then the end product. Depicting what seems to be a shalarin on a ship.