Selgaunt (pronounced: /ˈsɛlgɒnt/ SELL-gont[6]), formerly known as Chancelgaunt,[7] was a large merchant port on the Sea of Fallen Stars and the capital of the nation of Sembia following the destruction of Ordulin in the late 14th century DR.[5]

The city earned its newer name following the death of the great Sembian merchant-king Selgar, who had been interred beneath an ornate sepulcher within the city.[2]

Possibly the wealthiest city on all of Sembia, Selgaunt was an exciting metropolis that featured the high fashions, pageantry and brashness that was so often found in the Eastern Heartlands. The Selgauntans viewed themselves as the epicenter of sophistication, and saw their city as the heart of civilization in all the planes of existence.[2]

Selgaunt had a rich and active community of artists, dancers, and musicians. New performances of plays, highlighted by choreographed dances and choral arrangements were regularly put on within the city. Paintings, sculptures, carved statues were readily available throughout the city, were highly prized and often exported in trade with other cities.[2][8]

Music was especially prevalent throughout the city, as most Selgauntans could artfully sing and whistle complex melodies. Live performances could often be found in taverns, inns and the houses of noble families. Glaurs, zulkoons and thelarrs were popular instruments during the mid-14th century.[8]

The citizens of Selgaunt saw those from the Sword Coast in the west, northerners from the Dalelands and North Faerûn and those southern-folk from the Dragon Coast down to the Lands of Intrigue as filthy, barbarous savages. They thought worse of the people of Calimshan, as they were pretentious on top of everything else. They saw the kingdom of Cormyr as adorable country bumpkins who, despite their "royal" family, lacked proper breeding and sophistication.[8]

They even looked down on the other cities of Sembia as disadvantaged, depressing collectives; Ordulin was unfortunately insignificant, full of small-time merchants who were too busy counting their meager coins and Saerloon was a tired, apathetic city that was well past its prime.[8]

For many years, until the late 14th century,[9] Selgaunt was led by a hereditary merchant-prince known as the Hulorn. However, in the Year of Shadows, 1358 DR, other factions held the real power. These included the Knights of Selgaunt, who answered to the authorities in the capital city of Ordulin, and the influential and independent local noble merchant houses.[2]

The combined city guard/armed forces were known as the Scepters.[10] They were 9,000 strong during the mid-14th century and maintained a strong fleet of three dozen ships.[2]

Selgaunt had two prominent thieves' groups operating within its walls, the Night Knives and the Eyeless Mask of Saerloon. The adventuring company known as the Hunt were also based in the city.[2]

During the 15th century DR, Selgaunt had the largest Sharran temple in all of Netheril-controlled Sembia, a symbol of the rule of the Netherese overlords.[12] 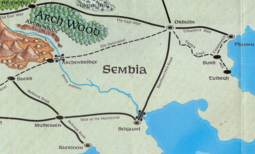 Selgaunt, circa 1367 DR.
Add a photo to this gallery

Retrieved from "https://forgottenrealms.fandom.com/wiki/Selgaunt?oldid=510895"
Community content is available under CC-BY-SA unless otherwise noted.