Selkie (Scottish)
A selkie, sometimes referred to as a (sort of) sealwere, was a very rare creature, capable of taking the form of a seal-like being or of a humanoid.[1]

Selkies were intelligent seal-like beings that, instead of flippers, had webbed hands and feet. Their eyes were either light blue or bright green, like that of emeralds. Other than that, they were indistinguishable from normal seals. These shapechangers were able to assume a human form, once per month, for around a week.[1] Their human form could vary, but generally they had tanned skin with black or gray hair.[4]

These creatures enjoyed seafood and acted in a peculiar manner, sometimes leading to their unwanted detection. Oddly, they also enjoyed wine.[1]

Compared to some aquatic lifeforms, selkies were passionately concerned about the welfare and health of their environment. They were more easily offended than others by surface dwellers and foreigners abusing their homeland's sea life.[5]

Their humanoid forms couldn't be dispelled, as they were antherions, but true seeing spells, or a creature with truesight, could see through the selkies' assumed form.[1]

The leaders of selkie communities typically knew the spells augury, control weather, cure disease, cure light wounds, and weather summoning. They generally only used weather related spells when they were in dire need of exacting revenge.[2] Beyond leaders, some more magically inclined selkies were known to take up the role of a hedge wizard.[6]

Selkies usually fought unarmed, as weapons made swimming difficult, slowing them greatly. They also preferred to run from combat instead of fighting, utilizing their strong webbed arms and legs to move away quickly. Thus, they used their natural weapons, such as their sharp teeth in their natural form, but wielded weapons when taking on humanoid form.[1] They were typically proficient in the use of cutlasses and other swords, tridents, and harpoons.[6]

These shapechangers were often led by a single leader, who acted much like clerics in healing and curing other selkies. They could occasionally control the weather, either calming or causing storms.[1]

Selkie communities were hunter-gatherer societies,[5] where work was split between providers (males) and those who looked after the family (females). However, both sexes were appreciated and respected, making selkie society very wholesome.[1]

Selkies enjoyed seeking treasures, usually from sunken ships, which they hoarded in their homely grottoes. As well as grottoes, selkies inhabited underwater caverns in cold water (saltwater or freshwater) environments. Their cavern-like homes had access to air, as young selkies needed to breathe air for the first year or so of their lives.[1]

Some selkies were known to inhabit the waters of Maztica,[7] the Moonshae Isles,[8] the Great Ice Sea that surrounded the arctic plains of the Hordelands,[9] Serôs in the Sea of Fallen Stars,[5] and that sea's northwestern fjord Dragon Reach.[10] In the Unapproachable East, selkies could be found in the lakes of Rashemen.[11]

Beyond the material plane, selkies were known to inhabit Aquallor, which they referred to as the Endless River,[12] as well as the River Oceanus.[13]

Some selkies were known to worship Istishia.[14] While others took up the role of shaman for the deity Surminare.[4]

Selkies often referred to the land above the ocean, where humans had settled, as being the "Overworld." In their human form, they would visit the Overworld and purchase supplies, or even information. They generally, however, had very limited knowledge regarding the surface.[1] Some selkies would spend great deals of time on the surface to try and influence the policies of human communities with regard to their native habitat. Some humans viewed them with a level of fear and superstition, confusing them with seawolves.[4]

Those that lived in Serôs were often allies with the neighboring aquatic elves and merfolk. However, for reasons unknown, selkies avoided interacting with neighboring locathah and shalarin.[5]

Around the mid-1300s DR, Black Pearl admitted that she'd spent most of her time being raised by selkies, not far from Waterdeep. She felt more accepted by the selkies than by the aquatic elves.[15] 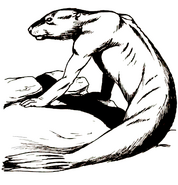 A selkie from 2nd edition.