The Shaar was a vast land of plains in south Faerûn. The lands to the west of the Landrise were generally called the Shaar, while those to the east were the Eastern Shaar.[1][2]

It comprised grassy plains and gently rolling hills, extending over 1500 miles (2400 kilometers) in length from west to east and with an average breadth of 250 miles (400 kilometers) from north to south. It was bounded in the west by the eastern edge of the Shining Sea and in the east by the realm of Veldorn. The northern side of the Shaar was bordered by the Firesteap Mountains, part of the Chondalwood, the Uthangol Mountains, and the southern border of Mulhorand. The southern border of the Shaar was made up by the adjoining Channath Vale along the river Channath, the Forest of Amtar, and the Toadsquat Mountains.[2]

The Shaar was divided by the Landrise, a great cliff face, and the Great Rift, a 200-mile-long (320 kilometers) long gouge in the ground. The plains were scattered with isolated forests and a few small groups of hills and crossed by a handful of shallow rivers and streams, though were often transformed into sandy gullies in the dry season.[2]

The Shaar received scant rainfall, so mostly only coarse grass, cacti, and thorny bushes grew on the plains. During daytime, it was incredibly hot, while at nights it grew very cold.[2]

Throughout recorded history, the Shaar was inhabited by nomad tribes of humans, centaurs, loxo, thri-kreen, and wemics, and it remained largely without civilization. They hunted the herd animals and regularly argued over water rights.[2]

Occasionally, other nations laid claim to some parts of the plains or established settlements to aid in trade, but usually only the ruins of these survived into the 14th century DR. Dragons, gnolls, manticores, perytons, and wyverns also challenged the nomads for control of land.[2]

Strewn across the Shaar laid several sites worth mentioning here:[5]

The majority of human settlements here mainly served as centers for trade and little else. They were close to water sources for their survival. Gold dwarves from the Great Rift built their own cities, some on the surface, most underground, which differed greatly from the trading centers of other races, since they didn't share their ideas readily.[6]

The following cities could be found in the Shaar: 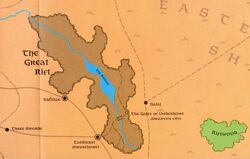 2e map of the Great Rift and Riftwood 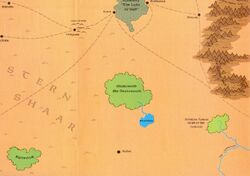 4e map of the Shaar Desolation