A shadow adept was a prestige class of Faerûn. Shadow adepts were spellcasters who fearlessly reached out to the Shadow Weave and grabbed for power and knowledge that took others years longer to achieve. Each and every shadow adept was solely concerned with becoming more powerful, which meant those of the good alignments, who singularly refused to be under the control of the goddess Shar, were absent from the ranks of these dark individuals. Shadow adepts made great sacrifices in their ability to tap the Weave in order to gain great power from the Shadow Weave. [1]

Low-Light Vision/Darkvision
A shadow adept could see well in dim light or complete darkness, regardless of race.[2]

Shield of Shadows
A shadow adept could create a sphere of shadows that provided protection and concealment against enemies.[2]

Shadow Double
A shadow adept could create an identical clone of himself using shadows. This clone had the shadow adept's abilities but required new weapons and armor if they were desired.[2]

In stat blocks for NPCs of the shadow adept prestige class, the class name is often shortened to "Sha", making it easy to to confuse with other prestige classes, such as Shadowdancers (which use the shortened "Shd").[3] 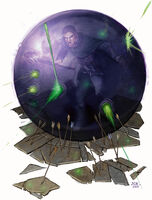 A shadow adept using his shield of shadows.
Add a photo to this gallery

Retrieved from "https://forgottenrealms.fandom.com/wiki/Shadow_adept?oldid=477001"
Community content is available under CC-BY-SA unless otherwise noted.