Shaerl was sent to Shadowdale by Vangerdahast in 1355 DR, to investigate why the last two lords of Shadowdale had been "chosen" by Khelben "Blackstaff" Arunsun. She fell in love with the then ruler of Shadowdale, Mourngrym Amcathra, and the pair married the same year.[3]

In 1358 DR, very pregnant Shaerl was attacked by an assassin sent to kill Lhaeo. The hulking humanoid dressed in black southern garb ambushed the soon-to-be mother and attempted to take her hostage. He did not expect Shaerl to be able to defend herself.[4] The Lady of Shadowdale elbowed the assassin in the stomach and knocked him out with a punch. The stress of the fight caused her to go into labor shortly after. Luckily Elminster and his guest Foxilon Cardluck were there to aid with the baby's delivery. The child was named Scotti Amcathra or Scotti for short.[2][5] 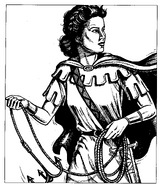 Dragonsmoker • Dragons (and Other Beasts)

Retrieved from "https://forgottenrealms.fandom.com/wiki/Shaerl_Amcathra?oldid=576907"
Community content is available under CC-BY-SA unless otherwise noted.