The Shalhoond, also called the Great Wild Wood, was a forest located in the Endless Wastes.[1][2][3]

Located north of Semphar and Murghom, south of the Khopet-Dag, and east of the Mountains of Copper, the Shalhoond marked the border between the nations of the south and the lands of the nomadic tribes of the north.[1]

Though no nation claimed the forest for themselves, both Semphar and Murghom had settlements on the edges of the forest that took lumber from the area, transporting the logs to Gbor Nor down the many rivers that ran through the forest.[1]

The Shalhoond was noted for its large amount of game, which attracted many hunters from both the north and south. The large number of monsters in the forest made hunting in it a dangerous venture.[1]

One explanation for the abundance of dangerous creatures stalking the woods was that it contained a colony of deepspawn. Further, some people believed that the elves of Narbeth brought them to the Shalhood just so they could have endless sport hunting the monsters.[4]

The Shalhoond was home to a realm of gold elves known as Narbeth, located in the northeast portion of the forest between the Khopet-Dag and the Teyla Shan mountains.[4] 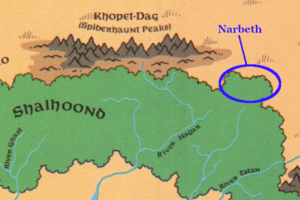 Map showing the approximate location of Narbeth.
Add a photo to this gallery

Retrieved from "https://forgottenrealms.fandom.com/wiki/Shalhoond?oldid=493105"
Community content is available under CC-BY-SA unless otherwise noted.