Marshes[3]
A shambling mound was a large, animated plant with predatory tendencies.[2] It was also known as a shambler.[6]

They appeared to be moving, vaguely man-shaped mounds of rotting vegetation. Shambling mounds fed off of the flesh and blood of living creatures they had engulfed and crushed within their own bodies.[citation needed]

A serpentine shambling mound was one that had been corrupted by tainted blueberries. Their bodies were stretched so that they resembled serpents with the head and hands on one end and the legs on the other, but otherwise they had nothing in common with serpents. There were only a few of these creatures. They dwelled in the east starwood area of the forest of Cormanthor, north of the Halfaxe Trail.[7]

In 1374 DR, the Shadowscale lizardfolk lured a shambling mound into the back entrance of their warren by bringing it animal carcasses. It served a dual purpose as both guardian and waste disposal. However, when they stopped feeding it (being undead, they no longer needed to eat), it went off and hunted on its own, but used the area as a den. Two shocker lizards joined it, forming a mutualist relationship: they gained the shambler's protection and ate its leavings, while their electric shocks bolstered and healed the shambler.[6]

In Northwest Faerûn, they could be found in the Mere of Dead Men[10] and the Stump Bog.[11]

In Interior Faerûn, they could be found in the Vast Swamp of Cormyr.[12]

In South Faerûn, they could be found in the Great Swamp of Rethild[13] and occasionally in the Thornwood.[14] 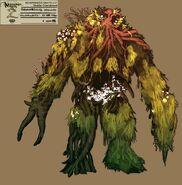 Concept art of a shambling mound from Neverwinter Nights 2.
Add a photo to this gallery

Retrieved from "https://forgottenrealms.fandom.com/wiki/Shambling_mound?oldid=612013"
Community content is available under CC-BY-SA unless otherwise noted.