Forgotten Realms Wiki
Register
Don't have an account?
Sign In
Advertisement
in: Items, Articles in need of citations, Pages with stub sections,
and 7 more

2 lb (0.91 kg)
The sickle is a farm implement slightly modified and strengthened to make a simple, light melee weapon.[5]

This weapon is like a farmer's sickle commonly used to harvest grains. It has a handle to which is attached a blade that is curved in more or less a semicircle, coming to a sharp point. The cutting edge is on the inside of the curve.[6] The whole weapon resembled a large question mark ("?") between 1‒2 ft (0.3‒0.61 m) tall.[5]

Combat sickles evolved from the working tool. Very common in farming communities, the inconspicuous nature of the weapon makes it an ideal choice for those areas where peasants are forbidden to own weapons. The sickle is favored by druids and any peasant who wants to carry a weapon yet have a chance to remain inconspicuous. Because of its shape, the sickle can also be used in trip attacks.[6] As with all light weapons, it can be used with finesse by dexterous individuals. Over the years, several design improvements have been made. Most notable are the change to the shape and length of the blade to facilitate combat, as well as the addition of improved forging techniques such as blade fullers to strengthen the blade and prevent breakage. As usual, the type of metal the weapon variants are forged from can be a big clue that you are seeing a weapon and not a working tool.

Sickles are in common use throughout Faerûn, Kara-Tur, and Zakhara though regional names vary almost as much as the basic design.[citation needed] The eastern version of the sickle is the exotic kama. 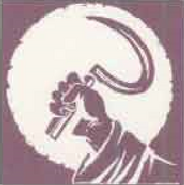 Crude illustration of a sickle from The Complete Druid's Handbook.