Silver[1]
Silver dragons, sometimes referred to as shield dragons,[9] were a breed of metallic dragon.[4][9]

A silver dragon enjoyed the company of humans and elves so much that it would often take the form of a human or elf and live among them for the majority of its life. However, it should be noted that silvers, like all dragons, believed themselves the most superior creatures in the world. However, apart from the ability to fly, which they enjoyed greatly, they tended to prefer the physical forms of humanoids for everyday life.[9]

The silver dragon was regal and statuesque.[4]

At first glance, a silver dragon appeared very similar to a white dragon. The wings were more curved than a white's, however, and a silver had two talons on its wings rather than the single talon of most dragons. The silver dragon also had a beautiful frill that began at the top of its head and flowed all the way down its neck and body to the tip of its tail. The frill was silver towards the body, fading to a purple hue at the edge. They had two long, smooth silver horns with black tips, pointing up and back from the head. They also had a pronounced sharp frill under the chin, which had the rough appearance of a goatee. They smelled like rain.[9]

They were very intelligent, more so than most humans, extremely powerful, breathtakingly beautiful, and had lifespans that could reach 4,200 years.[7]

Unlike the gold and bronze dragons, the silver dragon did not usually go out of its way to bring justice to the world. Instead, it waited for others to ask them for help; They would attempt to right an injustice if they saw one, but they had no inclination to intentionally seek evil out and destroy it. Silver dragons were more interested in protecting the humans or elves that came to its care.[9]

One unusual trait they had was the love of human dining;[4][9] moreover, they would use their alternate form ability to take part in large feasts.

Like most metallic dragons, silvers did not enjoy combat, and were averse to killing. If forced to fight, however, they were as deadly as any other dragon.[9]

Silver dragons had two separate breath weapons. The first was a cone of freezing cold, similar to that of white dragons. The second was a cone of paralyzing gas.[4]

Silver dragons were extremely rare and elusive, preferring to take the guise of kind and elderly humanoids or very attractive and young humanoids. They very much liked to associate with elves and humans, not necessarily because they preferred their company over other races, but because they tried to learn from the shorter-lived humans.[9]

Most silvers grouped together in "clans", a loose organization of dragons who chose to live together as a family. Clans took communal responsibility for protecting and raising their wyrmlings. A senior member of the clan might act as a leader, but no true leader actually existed. Silver dragons did not feel the need for a strict social structure, since they were most content to live as honestly as possible.[9]

Silver dragons' favored enemy were red dragons because these chromatic dragons were almost always evil and had a talent for destruction. Additionally, silvers and reds favored the same sort of terrain for lairs, which led to territorial disputes on top of having attitudes and philosophies at odds with the others.[9]

Dragons could live for millennia, while humans only lived a few decades. This vast difference in time led to inherent psychological differences concerning time. Dragons tended to think things through for years at a time, using their razor-sharp intellects to hone a plan to perfection, solve incalculable puzzles, or other such things. Silver dragons, however, noted that humans were able to accomplish much in their short lifespans because of their ambitious drive for success. When a silver dragon could combine its own long-term perspective with a quick and ambitious attitude, the benefit was undeniable.[9]

A silver dragon's lair was typically found within an icy mountain, with the main entrance only accessible by air. The lair itself was similar to the gold dragon's in its sophistication and design, although the silver dragon's lair tended to be far less intricate. A typical lair would contain a main entertaining area, a storage room, a vault, a sleeping chamber, study, library, shrine, and two clinic rooms where the dragon could offer help and protection to those who needed it. The lair would also have a concealed back entrance for use in emergencies.[citation needed]

As they matured, many silver dragons left their clans for long periods of time to live among nondragons. They tended to live for many years with the same group of humans or elves, having grown attached to them. As members of the family died, the silver dragon, grieved by the loss, often chose to stay with the family, remaining a true and loyal friend and champion through many generations. If the dragon felt comfortable enough around these nondragons, it might even decide to reveal its true self.[citation needed]

During the Time of Troubles of the Year of Shadows, 1358 DR, a brainwashed Luna used shapechange to turn into a silver dragon and attacked her friends Vajra Valmeyjar, Kyriani Agrivar, Onyx the Invincible, and Timoth Eyesbright outside the House of the Moon. However, the spell did not last long, and she quickly reverted to human form.[11][note 2] 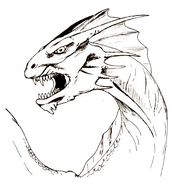 A silver dragon from 2nd edition.