Palace of the Simbul, Velprintalar, Aglarond[4]

The Simbul, born Alassra Shentrantra Silverhand, and also known as the Witch-Queen of Aglarond, was one of the Seven Sisters, a Chosen of Mystra, and one of the most powerful spellcasters in Faerûn. Her character was that of a wild and powerful sorceress, highly unpredictable and prone to sudden outbursts of rage. She was the queen of Aglarond, a nation in the east of Faerûn, but many of her subjects feared her as much as they respected her for her recklessness and apparent unstable nature. Her character was also noteworthy as the lover to the highly popular Sage of Shadowdale, Elminster.[8]

The Simbul was protected by a personal guard called the Simbulmyn, commanded by High Captain Hovor Seawind in 1374 DR.[9]

At some point before1362 DR, one of her apprentices was Brenna Graycloak, a council member of Aglarond and a Harper.[10]

It was rumored that the Simbul had written a document that named her successor and that the document is in the hands of the Harpers, believed to be with either Elminster Aumar or Khelben "Blackstaff" Arunsun.[11]

Being one of the Seven Sisters, the Simbul was the daughter of Dornal Silverhand and Elué.[12] After the death of her mother, young Alassra was entrusted by Mystra, the Goddess of Magic, to the care of Oraumae a witch of Rashemen. Mystra gave the witches spells that enabled them to rule Rashemen and repel invasions by Thay.[13]

After the Simbul left the witches, she started wandering the planes. Little was known about her whereabouts during that period, which lasted for some 400 years. It was said that Mystra herself revealed to her the fact that she was one of the Chosen of Mystra, after one of her consorts (allegedly a wizard from another plane) perished.[14]

The Simbul ended up posing as the apprentice of Ilione, a lesser sorceress and ruler of Aglarond. In 1246 DR, the wizard Elminster recognized the Simbul for whom she really was.[14] She took the name "the Simbul" from a deity of the primitive human tribes that inhabited the Yuirwood before the elves moved there, and whose runes can still be found deep within the wood (the goddess known as the Simbul was absorbed as an aspect of Labelas Enoreth).[15]

Ilione had designated the Simbul as her successor. The Simbul assumed the throne of Aglarond upon Ilione's death. Elminster's love helped reduce the frequency of her berserker rage fits, but she is still feared for the amount of damage she can inflict. It was the Simbul whom Mystra sent into Avernus, the first layer of Baator, to retrieve Elminster when he was banished there. King Azoun IV of Cormyr once called her “a good friend, but a deadly enemy”.[8]

The esteemed researcher, traveler, and writer, Volothamp Geddarm angered many of Faerûn's mages in the Year of the Serpent, 1359 DR when he published the infamous Volo's Guide to All Things Magical. Wizards felt that Volo exposed their secrets via the book and actively sought to punish the man. The Simbul was quite amused by the commotion caused by the hapless bard. She transformed Volo into a bird and made him fly into a wall as a punishment. The Witch-Queen dispensed some other magical chastisement on the writer, yet in the end, she gifted him an enchanted etched stone with a sly smile. The Simbul told Volo in a soft voice that his survival might depend on the stone's magic. She also warned the man that were he ever foolish enough to anger every spellcaster on Toril, no trinket would be enough to save his hide.[16]

The Simbul was widely believed to have been consumed in the fire that destroyed the deity Velsharoon in 1425 DR, the Year of the Seven Sisters. In reality, she survived[17]

Following the collapse of the Weave, Alassra was driven mad. The only thing able to return her sanity was the consumption of the magic in enchanted items, which Elminster and Storm brought to her whenever they could. Aside from these brief respites from insanity, the Simbul would transform into some wild creature, usually a raptor of some sort, hunting wild game and eating it raw. She would return to only a few familiar spots - the ruins of Tethgard and a cave near Storm's farm being two.[18]

The latter was set up specifically for Alassra by Elminster and those Chosen of Mystra that survived the Spellplague and could still perform magic. They placed a number of wards at the front of the cave that would terrify would-be intruders, and at the back enchanted a set of manacles that would give the Simbul comfort while keeping her restrained near an ever-full pool of water. She could survive there indefinitely, feeding not on food but on the magic of the wards - slowly draining them - and the water from the pool.[18]

She started to travel through the realms, closing dimensional rifts created after the Weave collapsed during the Spellplague, aided by the power of the Blueflame items and Mystra's guidance. In one of the rifts, she was ambushed by a horde of demons and almost dismembered, but she managed to prevail by absorbing the power of Blueflame items into herself, destroying the demons and the rift but transforming herself into a being of pure silver fire. After that, she traveled to Suzail to help her lover and arrived just in time to prevent Elminster from being killed by a group of Cormyr's War Wizards, who wrongly believed that the wizard was an enemy. In order to heal Elminster, she sacrificed herself by restoring the Old sage into his original body and giving him her silver fire, causing Alassra's body and soul to dissipate into nothingness.[5]

The Simbul and Thay[]

As well as signifying Alassra Silverhand's connection to Aglarond through its deific origins, the word "Simbul" meant "watchful warrior-wizard" in the ancient Aglarondan language, and Alassra lived up to that role. Her presence alone was a strong incentive for the Red Wizards of Thay not to attack Aglarond. When she committed herself to battle, the amount of damage she could cause is incredible. She sometimes made her enemies an example, using far more magic than necessary to destroy them in a spectacular fashion. No Red Wizard in his right mind would have faced the Simbul, and even her own subjects in Aglarond sometimes feared and avoided her, thinking her mad.[8] 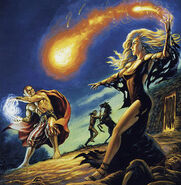 Simbul, in the midst of a spell-slinging duel.