Skeleton
Skeletons were undead animated corpses similar to zombies, but completely devoid of flesh and did not feed on the living. They could be made from virtually any solid creature, and as such their size and power varied widely. In addition to the basic humanoid skeleton, there were also skeletons created from wolves, trolls, ettins and even giants.[3]

The undead form of skeletons was held by necromantic energy, which kept otherwise loose bones and joints together and conferred on the undead corpse a glimmer of vitality and rudimentary intellectual capabilities.[1]

Although skeletons were most typically created from humanoid remains, many other varieties existed.[1]

Baneguard
First developed by priests of Bane, these skeletons could phase in and out and hurl bolts of magical energy.[6][7]\
Blazing Bones
Fiery skeletal undead created when a spellcaster's contingency spell goes wrong, these rare undead could be found in Myth Drannor.[citation needed]

Bonebat
A bat-like skeletal creature, created from either the bones of several bats or one giant bat.[8]
Bonecrusher skeleton
Large creature skeletons that were able to swing a greatclub with devastating results.[9]
Burnbones
Powerful priests of Cyric who have been transformed into their current undead state as a special favor from the Dark Sun. Their place within the church of Cyric is as the baneliches' within the church of Bane.[10]
Direguard
Baneguards improved by the Church of Cyric, these skeletons are wreathed in a shadowy field of force that functions as armor. They could also see invisible foes.[11]
Dust skeleton
Appeared like regular skeletons but with very dry bones, and much lighter as a result.[12]
Fiery skeleton
Burned with never-ending flames and it is immune to fire.[citation needed]
Merrow skeleton
A skeletal undead form of the merrow.[13]

Minotaur skeleton
A skeleton created from the corpse of a minotaur.[1]
Nimble skeleton
More agile than standard skeletons and able to climb as fast as it can walk.[citation needed]
Skeleton warrior
Powerful skeletons were created from great warriors who retained all of their fighting skills and enslaved to magical circlets. Highly resistant to magic and difficult to command, skeleton warriors were rarely found in groups greater than two or three.[14]
Skeletal dragon
Created from a dragon and retained some of their deadly abilities. Not to be confused with a dracolich.[15]
Spike skeleton
Tougher than regular skeletons and covered with bony thorns.[16]
Warhorse skeleton
A skeleton created from the corpse of a war horse.[1]

Animated skeletons were immune to mind-affecting spells; they could not be rendered unconscious and could not tire. Edged and piercing weapons, such as swords and arrows, were mostly ineffective against skeletons; only blunt weapons, such as warhammers, were effective at knocking the bones apart. [3]

The necromantic spell animate dead allowed spellcasters to create skeletons.[17] They could also spontaneously rise in locations saturated with evil or necromantic powers.[1] 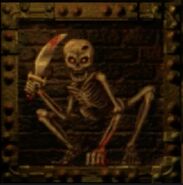 A member of the Cassalanter family, plaguing Waterdeep as a skeleton.
Add a photo to this gallery

Retrieved from "https://forgottenrealms.fandom.com/wiki/Skeleton?oldid=618263"
Community content is available under CC-BY-SA unless otherwise noted.