Williams first became involved with D&D at a young age, playing at Gary Gygax's house,[2] leading him to be one of many credited in the preface of 1978's Advanced Dungeons & Dragons Player's Handbook. He went on to become a longtime author of Dragon Magazine's column "Sage Advice" (a position he eventually vacated and had taken over by Andy Collins),[1] an editor of Polyhedron Newszine, and a chairman of the RPGA Network's advisory committee. At Polyhedron he handled submissions, convention announcements, and classified ads. His work with RPGA Network began in September of 1989, where he edited tournaments and presented seminars at conventions.[2]

When TSR, Inc. was purchased by Wizards of the Coast, he moved from Wisconsin to Washington and worked on the 3rd Edition design team, becoming one of its co-creators. Though he was laid off from Wizards of the Coast in 2002, he continues to produce D&D and d20 material on a freelance basis.[1] 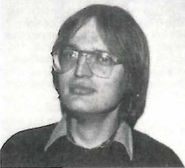